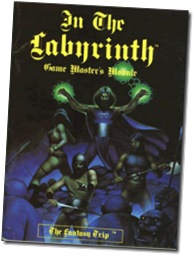 A look at Low Fantasy Gaming

9 thoughts on “The Fantasy Trip”