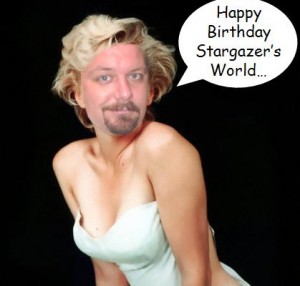 I know I’ve been a contributor to Stargazer’s World for a short time, but it already feels like home.

Friends had asked me why I wasn’t blogging before and I usually answered that I wouldn’t. Not because I couldn’t write (I believe I can do that passably) but because I felt that those things I felt passionate about were either, of little interest to other people, or sensitive subjects (like politics and other issues) and writing about them might affect my work environment or even future job prospects (don’t worry I’m not that radical, just very opinionated). So I had pretty much given up on blogging.

Then one day while I was doing a Google search for information on the Savage Worlds RPG I got a link for Stargazer’s World. I honestly can’t remember which post it was. I do recall I loved what I read. The style was friendly and very informative. The blog looked nice and most of all I felt the writer cared for what he was writing about. This was a labor of love and it showed. I do remember clicking on home and readying various other posts. After that I was hooked and bookmarked the page.

I found myself coming back every day to read the new posts, and clearly remember the disappointment I felt when I came to the blog on a Saturday and realized this Michael Wolf had the audacity of taking weekends off! I wanted posts and I wanted them now. Stargazer’s World became the place to go for RPG information. I began leaving comments and not long after that actually contacted Michael and we began to talk.

When he told me he was considering having other people contribute to his blog and asked me if I was interested I was so thrilled. He made this look fun (and it is) and had a contagious passion for blogging and gaming in general. I had read other blogs, but none that captured me like this one, and that I think it had a lot to do with what a great guy Michael is!

I owe a debt of gratitude to him, and my friend Daniel Perez, both of whom pushed me to blog and changed my mind about blogging. My first official contribution to Stargazer’s World was published February 19th, 2010. Roughly six months and fifty odd posts later I am so glad to be here. I’ve met so many wonderful people, made amazing friends and discovered a vibrant active community of people that feel passionately about gaming.

Happy 2nd anniversary to Stargazer’s World, I’m happy to be here. Thank you for the opportunity to write about what I love. If they have me, I hope to be here for many anniversaries to come!

PS – To get the full effect of the nightmare inducing picture accompanying this posts you have to imagine me singing the song like Marilyn Monroe did for JFK’s birthday! Now roll to see how much Sanity you’ve lost…

2 thoughts on “How I traveled to another world… A Stargazer’s World!”