“I know they accuse me of arrogance, and perhaps misanthropy, and perhaps of madness. Such accusations (for which I shall exact punishment in due time) are derisory” The House of Asterion (tranlsation), by Jorge Luis Borges 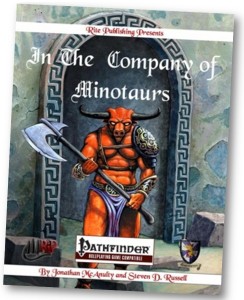 I love minotaurs, ever since first hearing the classic story, but I blame my love for them in role playing games on Dragonlance. The minotaurs of Krynn inspired me as a teenaged DM and when I first began working on my home brewed world there had to be minotaurs. As the world has evolved and changed through the years they have remained. Call it a throwback to my youth, personal taste or just the fact that minotaurs are COOL! Just look at World of Warcraft, they have Tauren, if WoW does it, it MUST be cool.

Ever since I switched my campaign to the Pathfinder RPG rule system I have NOT converted the minotaurs. I have also become a fan of Rite Publishing and their supplements supporting the Pathfinder RPG. When I saw on their Facebook page that they had published a minotaur sourcebook, In the Company of Minotaurs, I had to check it out. Would these be the new rules for minotaurs in my campaign?

Ok so let’s start this at the beginning, the cover. What can I say? I was less than overwhelmed. (Am I to be known as the guy who complains of covers?) The cover drawing of a minotaur is really bland. The minotaur is simple and the cover lacks emotion, he just stands there in front of an arch. It needs more action, more savagery, it just needs something. The minotaur on page 1 was VERY nice, I would have preferred that minotaur for the cover. But besides that piece in page 1 I was unimpressed by the art, serviceable but not inspiring. In their defense I have searched for minotaur art online and there is a dearth of good minotaur art, with counted exceptions. So besides the art, what about the content of the book?

Let’s start with the origin of the Taurians, as minotaurs are called in this book. I like the classic mythological feel to the story, loved the Asterion reference, and while I am not wholly sold on the Great Bull of Heaven made man and starting a line of minotaurs, and their ability to mate with other races, their origin feels classic but very creatively adapted to a “traditional” fantasy setting.

Their society and culture is functional if a little trite. I like their idea of their homeland being the Lightless Labyrinth and the details are interesting enough to get a creative GM going. The role of women and how the race reproduces mating with other races, how females of the species are treated, it all chafes me the wrong way. Perhaps I am being too politically correct; it may work for others, not for me.

There are two type of Taurians, the pure kind, more the traditional minotaur you expect and half-breeds called Mereitaur, which have some minotaur features but not all. The pure Taurians seem a tad bit overpowered when compared with other races in the Pathfinder RPG, but may be workable. The Mereitaurs are an odd bunch, I am not sure I can visualize the “sort of” minotaurs, but the mechanic works with the Taurian origin and society as presented.

I loved the inclusion of the alternate racial traits Pathfinder style, the favored class options and the class archetypes; they went out of the way to give the Taurians all the options of the other races in the Pathfinder RPG. The Racial Paragon class, the feats and equipment are very good as well. This is a 22 page PDF, take away the cover the Open Gaming License and the ads and you end up with 17 pages of background and rules.

Overall about half this book was useful for me. There are feats, ideas and rules, especially in the later part of the book I found of use. While I loved the background, it’s not one that would fit my campaign, but it made a very interesting read. I would have loved a mechanically more generic minotaur that I could simply drop in my game. If this is what you are looking for, the book may not be for you. If you are looking for a classically inspired, interesting, if not totally balanced race, but with lots of role-playing potential, pick up the book. They won’t be the rules for minotaurs in my campaign. Your experience may be different. This is just my opinion and your mileage may vary.

What about the Midgard Campaign Setting? A review…

What about Amethyst Renaissance? A review…

What about Advanced Feats: Secrets of the Alchemist? A review…

3 thoughts on “What about In the Company of Minotaurs? A review…”