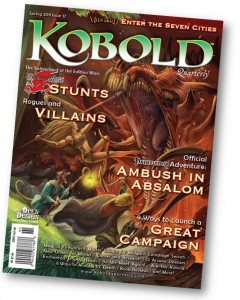 After such a long and convoluted title, I guess you know it’s time to look at the new issue of Kobold Quarterly, in this case issued 17, the spring issue. Both Michael and I have previously blogged about Kobold Quarterly (here and here for two instances) and if you are a regular reader you know we both are fans of Open Design products. They were kind enough to provide a review copy of their latest issue in PDF so here is my take on it.

Kobold Quarterly #17 is a 76 page full color magazine, including ads. The collection of articles in this issue covers the gamut of fantasy RPG systems, the typical D&D 4th edition and Pathfinder, while adding the increasingly more popular Dragon Age system, and includes some non system specific articles, such as advice columns and book reviews.  The issue’s theme is villains and they certainly deliver. Its chock full of goodies! I have said it before and will again, Kobold Quarterly is the spiritual successor of Dragon and Dungeon magazine. All in all this is a great issue, so don’t tarry, get you copy.

I do have more to say, if you are interested read on…

After the table of content, the introductions and other such formalities we get to the meat of the issue. The first article is called So We Meet Again! and it offers game mechanics for antagonists, both for the players and the villains. I love the idea, I am a big proponent of recurring villains and enjoy letting them escape to return and fight another day. Sadly players are not so keen on the idea. They would rather kill the villain now to avoid future complications. The idea of rewarding players for developing a hero-villain relation is a great concept; it dangles the reward carrot in front of them creating the incentive for them not minding the villain escapes. A great way to open the issue!

The other Pathfinder specific articles are an article on cons and swindles, magical fireworks, an inn and tavern with some secrets (including maps), and to top it all off, there is an official Pathfinder Society Quest! My Pathfinder loving heart is content, but what about the other articles?

There are articles on magical afflictions, organizations and items for monks, and magical foods specific to 4th edition, articles about group concepts, magical heads, alternatives to death in games, lackeys, hirelings and henchmen, advice by Monte Cook, book reviews, Ask the Kobold, like the Sage Advice column of old in Dragon.

Then there is the Dragon Age content. I was really looking forward to this since I have taken an interest in the system. I am yet to play it but it is on my GAMES TO PLAY list! There is an article on chases and research scenes in the game and another on integrating the stunts concept form Dragon age to other systems, like D&D 4the edition and Pathfinder. I love Dragon Age and hope to see more content for this game in future issues.

Kobold Quarterly is available both in print and PDF, so whether you like dead tree or digital (or both), this is another solid issue of the Kobold. You won’t regret paying the entrance price! Enjoy…

A parting thought… As the summer issue approaches, will the cover be a bikini clad kobold model? Inquiring minds want to know!

PS – The link to the t-shirt in the picture on this post is here, I just love that t-shirt!

Get Kobold Quarterly #14 for free