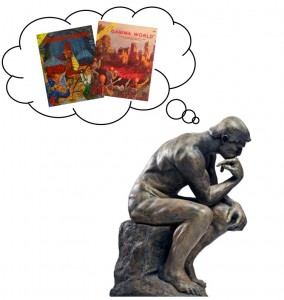 This week I purchased some digital RPG supplements in PDF, pre-ordered a book, and I got home today (Saturday) from the Puerto Rico Comic Con (shameless plug) to find a box from Amazon with the copy of Traveller by Mongoose Publishing. As I sat down with the book to reminisce about that system in particular (and that’s a whole other post, and hopefully the last parenthetical interruption) I found myself travelling down memory lane to how we buy our gaming books and how times have changed.

When I first got into gaming the first place I remember seeing RPG related books and boxed sets was a small quirky book store in Old San Juan, The Book Store. The owner sat behind the cashier and knew almost all his clients, they had a small sci-fi section in the back and under the shelves holding these books were some baskets holding the aforementioned books and boxed sets along with several assorted war games. 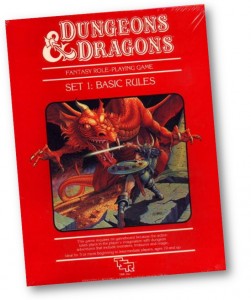 When my mom brought me the red box Basic Set I got it at this place. I remember it being dimly lit and musty smelling, which added to the mystique of getting the game. Later I learned that a local hobby shop which mostly carried models had a shelf with RPG modules and books piles together haphazardly in the back. Likewise the local K-Bee Toy Store had a bunch of books there hidden among the board games. I was soon rifling through these stacks to get my grubby little hands on them. And then I discovered the gaming sections in B. Dalton Booksellers and Bell, Book and Candle (a local book store) with their organized well stocked gaming sections. I was in nerdvana! 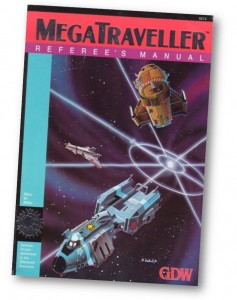 And for the longest time these were my main sources of games. I went there every month to get my Dragon magazine, and in the back of that fine publication were ads for game catalogs. They promised access to games I had never seen, so I sent out for the catalogs. A couple came in and I devoured them, and then came the granddaddy of them all. Printed in newsprint it read like the classified ads peppered with the black and white small image of a cover or miniature. The Wargames West (click on that link to see I’m not the only one who remembers them fondly, and see some nice pictures of the catalog itself)  catalog changed my life. It was there that I read about the Robotech RPG for the first time, or Mega Traveller, and where I got the games I could not get in the local book stores.

Every time the Wargames West catalog would come in I would sit down and examine it. I would circle every game and miniature I wanted and then add it up, realizing my allowance would never cover the hundreds of dollars I wanted I would be forced to trim down. I remember sending in my orders and waiting with bated breath for the package. It was then that I discovered the hellish nuances of shipping, especially if it came via UPS. My relationship with UPS has improved and now they are greatly efficient, but back then it would be impossible to get the package delivered properly.

So went my life for the longest time, until comic store and game stores began to pop up in Puerto Rico. Soon I was ordering my games at the same place where I got my comics. I loved comics so much that I was soon working at a comic and games store. These were dark times for my income. I was the perfect employee, the kind who would get his paycheck and give it right back buying stuff. It was a wolf watching the sheep situation, but I was the sheep!

Back then I got most of my games at the store I worked, and even after I quit working there I was a faithful client. All through this time whenever I would travel to the United States one of the first things I would do was look for the yellow pages and search for game stores, make a list and try to see how many I could visit. I would use these opportunities to get games I could not get back home.

Somehow that happened less and less often. Distribution got better, I could get most games locally, and after the arrivals of big chain book stores games were even more accessible. As this was happening I was also becoming more and more comfortable with online purchases and embracing the idea of digital books. That last step was totally embraced when carrying the books around became viable, first with laptops and now with readers and smart phones. I had gone from the thrill of searching for the unknown in small mysterious book stores, to embracing the idea that getting a book in PDF is almost just as good as getting the real thing. It’s been a fun ride; I wonder where we’ll go next?

These days I get lots of books in digital format, get most of my RPG related books via online stores or retailers, and buy miniatures from specialist sites or even e-bay. Sometimes if I have a coupon and they have the book I want I may get it at a large chain bookstore. Occasionally I get game books at my friendly local gaming store, I still believe in supporting them, but mostly big releases from major brands. They seldom carry the independent or small press stuff and I understand why.  There is a proliferation of smaller local stores catering to the CCG crowd, but branching out into games. I feel the desire to support them and help the local market grow so I’ll be visiting them soon to try to put some of my money where my mouth is and hell the local gaming scene grow. I’ll let you know how it goes…

So now it’s my term to ask, how do you get your games? How did you use to? Has your experience been similar to mine? I look forward to your comments…

Games I was sad to see go away…

6 thoughts on “How we buy games… A retrospective!”