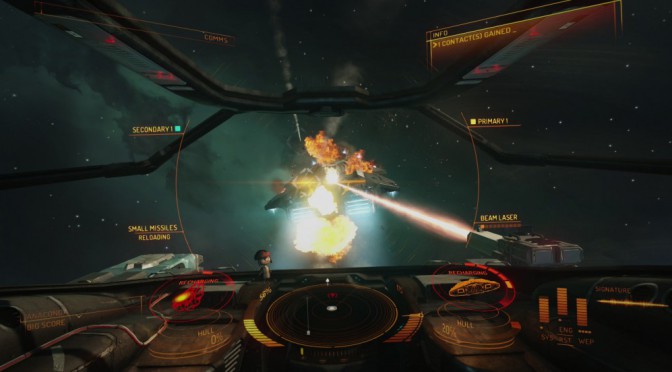 It’s not often that I write about my other, non-RPG hobbies. But there’s one computer game on my mind right now, that I just have to talk about: Elite Dangerous by Frontier Developments.

Elite Dangerous is the latest game in a series that started with the 1984’s Elite for the BBC Micro written by David Braben and Ian Bell. Elite was the first computer game that had an open-world, real 3D graphics and could be played for months. Its successors Frontier: Elite II and Frontier: First Encounters came out in the mid-90s and had much better graphics, a more realistic universe including a realistic flight model. Frontier: Elite II is one of the games I enjoyed very much, even though it had a lot of technical issues.

Hmm, perhaps I should write a few sentences about what Elite is about. In the original game you started with a Cobra Mk III space ship in the Lave system and some credits you could spend on trade commodities. You could then try your luck as a trader, pirate, or bounty hunter. The overall goal was to reach Elite status, but how you reached that goal was up to you. In Elite there were 6 galaxies with 256 stars each you could explore. In the upcoming Elite Dangerous you’ll have the whole Milky Way to explore. In a way it will be THE open-world game!

For some reason I missed the Elite Dangerous Kickstarter but during the last months I almost watched every piece of Alpha footage I could find on Youtube. The graphics definitely look great and the gameplay I’ve seen so far is pretty awesome even considering that the game was still in Alpha.  The sound design is just awesome and the UI really helps to immerse yourself in the universe. Elite Dangerous will also be a multiplayer game (single player is still an option though) which allows you to play with other people.

At the moment I am really tempted to buy the Premium Beta package. It’s quite expensive (120€) but it includes access to the beta plus the full game when it comes out including all future expansions. At least two expansions are already planned: one that will allow to fly around in planets’ atmospheres and land on planets, moons, etc. and a second one which allows you to leave your space ship to run around in cities or even go game hunting on alien planets. Wow!

Dungeonslayers: The deed is done!