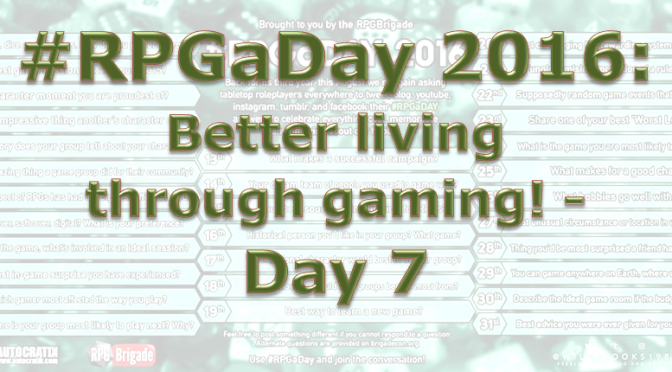 Welcome back dear reader, as the first week of this year’s challenge comes to a close; let’s tackle a very interesting topic:

August 7: What aspect of Roleplaying Games has had the biggest effect on you?

I attribute a lot of positive aspects in my life to gaming. Role playing games have been my main hobby for thirty years, I’ve met some of my dearest friends through gaming, to this day I maintain that playing rpgs once a week is the therapy that helps keep me grounded and sane!

I was always a voracious reader, even before rpgs came along, and all modesty aside, a pretty good student. I can’t say my skills in English or math come just from games, they undoubtedly helped, but I was already working on those before I discovered role playing games. The aspects of my life where I can see the clearest influence of role playing games is in my social skills and my abilities as a trainer and teacher.

I took on the mantle of Game Master (Dungeon Master at first) early on. If I wanted to play I would have to learn the rules and run the game for my neighbors. I did, and I enjoyed it immensely! To the point where when I think of playing and rpg I immediately envision myself as the GM. Being a GM required I learned to communicate effectively, to improve as a storyteller, learn about story structure, pacing; I began to do voice and act out character quirks. Those that know me might find it hard to believe, but I was shy as a teenager, through games I interacted with more people, rpgs became something we shared and we could talk about, a GM can’t be shy!

All this became useful in a career in education; teaching has a component of entertainment. To facilitate the learning process, to coach students, children or adults, through learning experiences, I firmly believe you have to make the experience fun. It’s not my role to be the center of attention in those circumstances, but I can certainly make the time spent learning fun and exciting, and I’m better at that because of gaming.

Gaming has allowed me to meet so many people, connect with new friends, and reach people far beyond my immediate circle of friends through Puerto Rico Role Players, social media, and my contributions to this blog. Abilities I learned as a GM, being impartial, tolerant, patient, equitable, are all skills I’ve put to good use in real life. I can say my life is richer for role playing games!

Let me share and old school comercial from TSR, a trip down memory lane very close to when I started gaming. From 1984 and I started in 1986!

What aspects of rpgs have most impacted you? Let us know in the comments. See you all Monday. Enjoy the rest of the weekend.