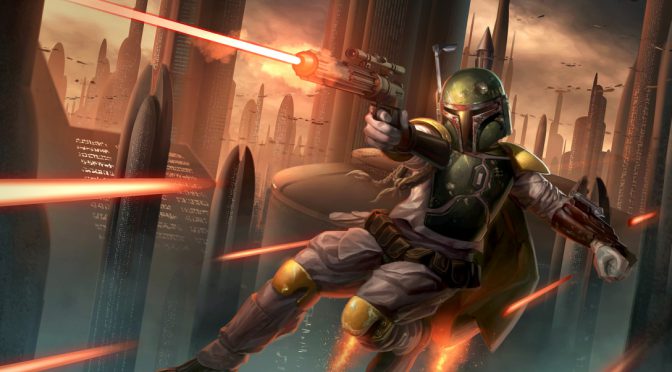 Yesterday I wrote about West End Games’ venerable Star Wars The Roleplaying Game, today I want to muse about the current incarnation of Star Wars in roleplaying form. Recently I finally had the chance to play Fantasy Flight Games’ Edge of the Empire game and I have to admit I was very positively surprised.

Usually I am not fond of roleplaying games using custom dice, but if there’s one thing Fantasy Flight Games is good at, then it’s creating cool dice mechanics. FFG’s series of Star Wars roleplaying games uses various polyhedral dice with symbols that denote successes, failures, complications, etc. At first reading the dice is a bit fiddly, but after a while it becomes second nature. What I really like about the dice mechanic is that it provides GMs and players with a lot of space for interpretations. If you’re creative you can get a lot out of your dice rolls, which then leads to very cool Star Wars moments.

I think I have written about my opinion on the physical product, the core rulebook for Edge of the Empire, already, but if not, let me share a few thoughts. As with most FFG products the core rulebook is a very well produced hardcover book with outstanding artwork. It’s quite expensivve, but you’re definitely getting your money’s worth. That being said I am not too happy with this whole “a core rulebook for every setting” scheme. Aside from Edge of the Empire which is basically Han Solo The Roleplaying Game, there are the Age of Rebellion, Force and Destiny, and the upcoming Force Awakens Roleplaying Game lines. So basically every Star Wars sub-setting gets a complete line of products which are 100% compatible. The core rulebooks are perhaps not total copy-and-paste jobs, but a lot of the material is redundant. They’ve used this scheme with their Warhammer 40K RPGs as well and I didn’t like it there either. From a business perspective it makes a lot of sense though.

So if you are a collector of all things Star Wars you can sink a lot of dough into the Star Wars RPG lines. Up to this point there are already countless source books for all existing lines and I am pretty sure FFG will produce many more as long as they are holding the license.

One last thing: can FFG’s Star Wars RPG replace the West End Games one as my go-to Star Wars roleplaying game? Hmm, that’s a tough one. I think it depends a lot on the target audience. Your regular grognard is probably more than happy with the old WEG game. But especially if you’re running a game for kids, or people who are usually not into RPGs, I recommend FFG’s game. For some reason it feels more vibrant, more flashy. Since it’s also currently in print it’s also the easier choice. But you should keep in mind that if you want the full Star Wars experience you’ll need to buy all the core rulebooks, which are quite expensive.

So what are you’re thought on the subject? Please share your comments below!

3 thoughts on “Some Thoughts on FFG’S Star Wars RPG”