We all know the classic superhero comics. Usually they are set into our modern world and the heroes wear either spandex or leather suits in flashy colors. But why not set a superhero tale into a medieval fantasy world? In a way D&D4E has done it, but a fantasy Mutants & Masterminds campaign comes to mind.

If you look at mythological heroes they usually have special powers not unlike the superheroes from your favorite comic book. I remember that I own a thin X-Men comic book where our heroes are in an illusion created by a villain so that they believe they are living in a medieval city. In that story Storm was some kind of queen and Wolverine a lone mercenary with a large sword. I found the idea intriguing. 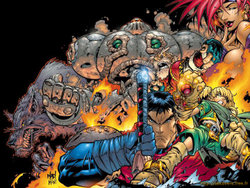 One of my favorite comic series is still Joe Madureira’s Battle Chasers. It’s a shame that it was never completed. The protagonists of that series are all exceptional in their own right, much like modern day superheroes. There’s Gully, a small girl, wears the magic gauntlets of her father, giving her enormous strength, Calibretto a wargolem, Garrison, the famous swordsman, Red Monika, a rather voluptuous thief and Knolan a powerful wizard. This group not only reminded me of a D&D party but also of superhero teams.

So, what do we need to mix the fantasy and superheroes genres?

What do you think? Could a “superheroes genre meets fantasy” campaign work? I will definitely play around with that idea. I still have to think something up for next week when I want to introduce two friends into roleplaying. Perhaps some superheroic fantasy could be their thing.
P.S.: Thanks to ChattyDM for giving my creativity a jumpstart over Twitter today and to Greywulf for his excellent superhero-related posts! 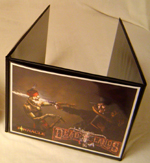 I have seen a lot GM screens in my roleplaying times and most of them were either not too sturdy or the information printed on the GM’s side was only partially useful. One excellent GM screen was the one released by WotC for the new D&D 4th Edition but there’s another GM screen that put’s them all to shame!

I am talking about the “Savage Worlds Customizable GM Screen” by Pinnacle Entertainment Group. For around 26 bucks you get a sturdy trifold vinyl screen that has 6 pockets that you can use to customize your screen. I currently use it with the Pirates of the Spanish Main insets that you get for free at the official site, but you can easily create your own insets. If you don’t mind to create your own insets, you can use this GM screen with any roleplaying game. And since it’s coated with vinyl it’s pretty resistance to the common dangers on the playing table like sticky softdrinks, candle wax and/or spilled snack food.
You can even use it to hit your players if they don’t behave. It’s the perfect tool for the GM. 🙂

This saturday, we concluded our first Pirates of the Spanish Main adventure. I used the adventure that was printed in the back of the book, added some things and made some minor changes to the characters. I also built up the Baron Pettigrew to become a recurring villain.
And instead of going to plan another adventure I will now prepare for a sandbox campaign, where the players fully decide what they want to do. I will of course always have some single-sheet adventures ready, but for the most time I will try to avoid “rail-roading” the players.
In my opinion the Spanish Main is perfectly suited for that kind of campaign. But hey, what do I mean when I talk about a sandbox campaign? I am talking about a open-ended campaign where the player’s decide the course of action not a pre-planned adventure. If the player’s want to go plundering, it’s fine with me, if the want to do trading, it’s their call.
As a GM I will set the background and once in a while drop in some hints on some things I’ve planned in the past. Just like the “sub-quests” in some computer games. But there’s no epic “rescue the world from utter destruction” plot that forces me to railroad the players to some climatic fight at the end. If they want to bring down the evil Baron Pettigrew, it’s their decision not mine. But I have some ideas on how the world will change around them even without them doing anything. After all, even the Spanish Main in the 17th century was not a static place.