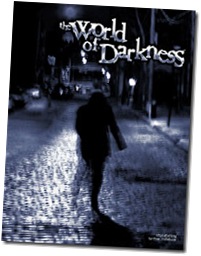 I just found out that the World of Darkness rulebook is available for free on RPGNow in celebration of “Read an E-Book Week”. This 224-paged PDF is the core rulebook for all “new” World of Darkness settings like Vampire – The Requiem or Geist – The Sin Eaters. But since the updated Storyteller is pretty versatile I am sure an experienced GM can easily run his own urban horror campaigns with this book. Here’s the blurb from the RPGNow product page:

Where the Shadows Grow Long
We live our days completely ignorant of the true terrors lurking around us. Only rarely do our experiences draw back the veil of shadows and reveal the horror in our midst. These glimpses into the supernatural can cause us to retreat into comforting lies – ‘There are no such things as monsters’ – or stir our morbid curiosity. Only a few, however, can overcome their fear and dare to look deeper.

Abandon Hope All Who Enter
The World of Darkness Rulebook introduces a version of our contemporary world where the supernatural is real. Players join to tell tales of mystery and horror, where theme, mood and plot are more important to a character’s experiences than his weapons or equipment. Inside are rules for character creation, task resolution, combat and any activity your character attempts as he delves into the shadows.

If you don’t own this book, you should definitely head over to RPGNow and download it now. It’s definitely worth it! 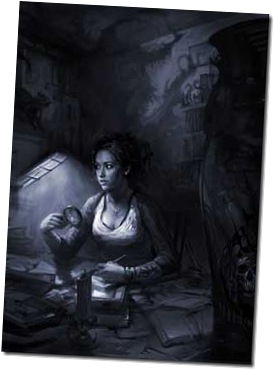 This morning, Andrew Modro and I where talking about the old Vampire: The Masquerade Revised Quickstart rules on #rpmn. In his opinion the mechanics used in these old quickstart games are even better than the full Storyteller rules: light, fast, but still capturing the essence of the game.

When I mentioned that someone should write a Microlite version of the Storyteller, Andrew let me know that someone already has done so. And indeed ENWorld forum member CQuail has written Microlite Storyteller, a complete game based on White Wolf’s World of Darkness on just a couple of pages. He even created pocketmod versions. If you want to have a look at CQuail’s work, you can check out the original ENWorld thread or download the PDFs directly: 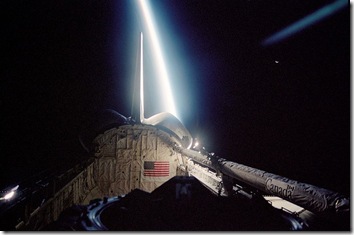 Today I want to give you an update on what’s brewing at Stargazer’s World right now.  Just today I finished the first draft of a rather long post (1771 words so far) that will go live as a guest post on Philippe Ménard’s blog in a few days. We decided that the topic would make a great post for his blog and perhaps it helps to convince some of his readers to check out my blog too. 😉 Actually I am a bit excited since it’s the first guest post I have written for another blog. And ChattyDM is one of the people who helped me a lot since I joined the RPG Bloggers Network last year. His posts and good advice over Twitter or IM always helped me to get over the deepest of slumps.

In the meantime I am reading several RPG books I purchased recently. Alas some of my offline activities are getting into the way. It doesn’t help that I am now actually an elected local politician. I have been in politics for over ten years but it’s the first time I got a parliamentary seat in our town parliament! Yay!

But back to the RPG books I mentioned. I still have to read Eclipse Phase, the new game from Catalyst Game Labs. I got the PDF as soon as it was on RPGNow and printed it out. Alas I haven’t had that much time to read it, yet, probably because I then picked up a copy of Fantasy Craft soon thereafter . Fantasy Craft is a pretty cool d20 fantasy game that was created by the guys behind Spy Craft. If you want to read more about this cool game, you should check out "Life and Times of a Philipine Gamer". But rest assured that I will write reviews of both games when I have finished reading them.

I also got both the hardcover version of Vampire: The Dark Ages and Hunter: The Reckoning from a German blogger’s "Garage Sale" for just a few Euros, so expect some first looks of those games, too. Both books are probably out of print and at least Hunter has a successor called Hunter: The Vigil that sounds pretty interesting. And even if you don’t want to run games using the old World of Darkness rules, you still can use both books as inspiration for campaigns using the new WoD line for example. Hunter (the old or the new version) also sounds like the perfect world for the horror solo game I wanted to run for some time now…

I also started working on a translation of my Dungeonslayers supplement "Fireworks" to English. The booklet contains not only rules for firearms, cannons and explosives for Dungeonslayers but also introduces a completely new class. I don’t know when the translation will be done (this usually takes a lot longer than you think) but expect some previews as soon as I have something to show off.

I am also working on a secret layout project that is way past the initial deadline. Hmm, perhaps I should make this project top priority then…

Aside from all that I also would like to work on a Swords & Wizardry campaign based on the later titles of the Ultima series. But since I am already having too many unfinished projects I will probably put this on the back burner for now.

Phew! This post got much longer than I expected. But you now should have a pretty good overview about my current plans for this blog, so stay tuned. And if you have any comments, questions or advice please let me know! Any comment is highly appreciated!