Please note: This is a first look, not a proper review. I haven’t read the whole book yet and I just write about my initial thoughts. So please take everything written here with a grain of salt.

Traveller was the first roleplaying game I ever ran as a GM and this Saturday I finally got a copy of the 2008 core rulebook by Mongoose Publishing. Usually the book costs $39.95 for the 192-page hardcover book, which is quite expensive (you can get a PDF copy for $27.96 at RPGNow). That’s why I ordered a “damaged” copy over the German Amazon Marketplace for mere €6 that turned out to be of almost perfect condition. 🙂

Traveller is one of the oldest roleplaying game series in existence and was created in 1977 by Marc Miller. The latest version created by Mongoose Publishing in 2008 is surprisingly close to the original. As in the original game you gave to roll 2d6 when a character tries to succeed in a task. Appropriate modifiers (like Attribute and Skill modifiers) are added and you succeed when your result beats a given target number. For example Dex 8+ means, you have to roll 2d6 add your Dex modifier. A roll of 8 or more is a success.

The character creation system is definitely a highlight of the system. After you’ve rolled up your basic stats and decided which planet you’re from (which gives the character some appropriate starting skills) you can enlist in one of several careers. But choosing a career is not like choosing a class in D&D for example. Traveller uses a lifepath system that not only generates your character’s traits but also provides the character with a background. It’s possible to change careers by choice or by fate (you have to roll to reenlist for any career) and certain mishaps and life events can happen. In the original Traveller it was possible that a character died during character creation. Now the worst that can happen is that the character is wounded and has to enlist into a different service for his next 4-year term.

When I remember correctly the original Traveller had only a few careers including Scout, Merchant, Navy and Army. Mongoose expanded that list by the following careers: Agent, Citizen, Drifter, Entertainer, Marines, Nobility, Rogue, Scholar and Psion.  Aside from the lifepath system there are also alternate character creation rules that allow you to use a point-buy system.

Another favorite part of the book is the Spacecraft Design chapter. The spacecraft design rules look easy enough to come up with a couple of spaceship designs in a few hours and is definitely not as detailed as the GURPS Vehicles rules. A nice touch is the addition of alternate drives. Traditionally spaceships in Traveller use the Jump drive, but if you want to use the Traveller rules for a different setting, you can create ships using Warp drives, teleport drives or even hyperspace portals. The rulebook also includes a couple of common spacecraft including full deckplans.

I haven’t had the time to read the whole book but from what I’ve seen so far the Traveller Core Rulebook is a great basis for almost any SF campaign. Although the rulebook uses an implied setting much like the D&D core books, you can easily adapt it to other campaigns than the “Third Imperium”. And if you are a fan of sandbox campaigns you’ll notice that Traveller is a great resource for space-based sandboxes. You get a chapter about encounters (with random encounter tables), a whole chapter on Trade and an extensive world-creation system. Just create a subsector (a section of space of 8 times 10 parsecs) and you’re good to go. A sample subsector map is included.

So, do I recommend Traveller? Hell, yes I do! If you like classic space opera you’ll love the Traveller Core Book. Although it’s only 192-pages long you get a lot of material for your game. And from what I gather you should probably be able to run almost every SF campaign with only a bit of tweaking. If you prefer glossy paper and full-color artwork in your RPG rulebooks you’ll be pretty disappointed with the b/w interior and the pretty bland cover but if you ask me, the classic look has its special charm. 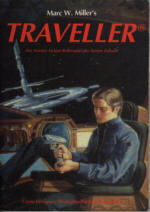 I have to admit I own a lot of different roleplaying games. Some I haven’t even completely read, some I haven’t even tried out and there are a few that have very fond memories connected to them. One of these games is the original Traveller, that I bought probably around 1990.

My copy is the second printing of the german translation of Traveller that was published under license by Fantasy Productions. When you open the 160 pages paperback book you will immediately notice that this game hails back to 1977. It completely black and white and printed on matte paper. Compared to modern rulesbooks with glossy paper and many full-color illustration this book looks very bland. But it’s probably on par with other rulebooks from that time.

Traveller is a SF roleplaying game and possibly the first SF roleplaying game ever (correct me, when I am wrong). Although Traveller was intended as a generic SF roleplaying system that can be used with a lot of different settings, the rulebook contains the implied setting of the “Third Imperium”. The Third Imperium was heavily inspired by a lot of classic science fiction books like Isaac Asimov’s Foundation series or Poul Anderson’s Polesotechnic League (two of my favorites). I am pretty sure you can run a Foundation campaign with Traveller rules without a problem. Just don’t use any aliens and you’re done.

The rulebook starts with the chapter about characters. Character creation in Traveller is very random. You start by determining your Stats (like Strength, Dexterity, Social Status, etc.) by rolling the dice, these stats are then combined into your UPP or Universal Personality Profile. The UPP uses hexadecimal values to give a shorthand for all stats. A possible UPP would be 747B85 for example. After that you roll on several tables to determine with kind of service the character enters, what skills he or she learned, if any special events happened or if he or she was reinlisted for another tour of duty. It is even possible that a character dies during character creation. When a character finally leaves the service he or she is ready for adventure. This character creation method creates some quite interesting characters. You don’t even have to come up with a background story since most important events where already rolled up during character creation. BUT you have almost no way to control what kind of character you roll up. Imagine you want to play a dashing navy officer but you end up with a dead space trader. Bummer!

The next chapter describes combat in Traveller. The combat system is pretty standard, perhaps a bit on the easy side but has some strange damage rules. There are no hit points but weapons damage the three physical attributes Strength, Endurance and Dexterity. If one of these value drop to 0 or below the character dies. For every point in Dexterity you lose, you have to reduce your combat rolls by one for example. The system works but I would have preferred to have some hitpoints or something like that instead. When I remember correctly that was one of the things I changed when I ran Traveller as a GM.

The following chapters give detailed information about space travel, trade, space ships and space ship construction, computer, space combat, worlds, encounters with animals, encounters, experience and many more. This part of the game still can be used today even if you prefer different rule systems. Travellers system for creating star systems helps even the science-illiterate GM to create believeable star systems. In many ways the classic Traveller rulebook reminds me of GURPS Space. And although Traveller was created with the “Third Imperium” setting in mind, you can easily adopt it to other science fiction settings.

The rulebook even includes two adventures, some details on the “Third Imperium” and a complete region of space for you to explore. But it also lacks a lot of stuff that is usually included in modern games. Although alien races are mentioned, you don’t get any details on how to create alien characters. There are no stats for common NPCs, so the GM has to do all the work himself.

If you are interested in running a SF campaign with an “old school” atmosphere, you can easily pick up and play Traveller. If you still can get a copy, that is. But you will probably have to plan in quite a few hours to prepare things. If a game from 1977 is a bit too old school for you, check out one of the newer incarnations of Traveller. But I am sure that there are still some people out there that enjoy a game of classic Traveller once in a while.