I usually don’t write about non-RPG stuff on my blog, but this is special, so I make an exception. “The Tale of Lancaster’s Folly” is a story written by my good friend Vince Kingston. Today he finally released the novella on DriveThruFiction and – when Amazon approves – it will also appear in the Kindle store.

A couple of weeks ago I had the pleasure to read a draft of this short story and I totally loved it. If you are into modern fantasy like Jim Butcher’s Dresden Files novels, you definitely should give Vince’s short story a chance. 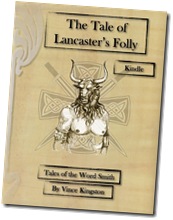 So what does an eighteen year old do for fun?

Apparently he gets sent to England to deal with a rampaging minotaur!

Most kids his age only have to deal with acne, choosing the right college, or having a few drinks with their friends. Brandon Taylor isn’t most kids though. He’s spent most of his school life being picked on, bullied, and just trying to survive the hell that’s high school.

He’s also a Bard, a teller of stories. Though his stories have a way of taking on a life of their own.

The Tale of Lancaster’s Folly is Brandon’s first adventure. Having been assigned the task by his mentor, Brandon journeys to England for what would become the biggest adventure of his young life.

It’s available for just $1.49 on DriveThruFiction in ePub or Kindle (MOBI) format.

UPDATE: Vince just let me know that both versions will be only $0.99 for a limited time (until April 15). So you might want to act fast!

Ready to become the BADASS you always dreamed to be?