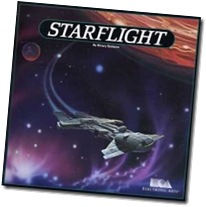 Yesterday I mused about roleplaying in the SF genre and in the evening I remembered some of the computer games I enjoyed tremendously in my youth: the Starflight series and Star Control 2. Both game series featured space exploration, mining, tongue-in-cheek humor, space combat and a huge galaxy to explore. Starflight 1 for example had about 250 stars with over 800 planets. And aside from high-G planets or gas giants you could explore all of these planets, mine raw materials and explore ruins left by the Old Empire and the Ancients.

In both game series you commanded a modular spaceship that you could customize and upgrade to a certain extent and Starflight had a few classic roleplaying elements when it comes to creating your crew. Each ship officer had several skills like Navigation, Science and Engineering and could be from one of the races living on Arth, your homeplanet. 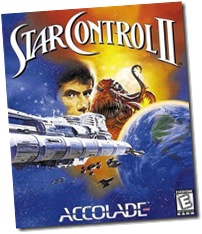 The question is now: how can we take both games as an inspiration for a pen & paper RPG campaign? What I like a lot is the focus of exploration in both series. There’s a vast galaxy out there and the players are boldly going where noone has gone before. Because there is no FTL communication, a starship is mostly on it’s own. There’s probably an overall mission but what the players do is mostly there own decision, there are no Admirals holding their hands all the time. So in a way the crew of such a spaceship is a lot like the classic adventuring party.

A campaign inspired by Starflight/StarControl is probably best run like a slightly modified sandbox game. The players decide what route they want to take, but everything is given some direction by an overall mission. This may be finding a new home for humanity, fighting against a terrible foe, learning more about a now extinct precursor race, or whatever else might motivate your players.

The next step will be coming up with a setting that works a basis for such a campaign. I already have a couple of ideas that I might share with you in the upcoming weeks, but if you have any ideas of your own, feel free to share them in the comments below!