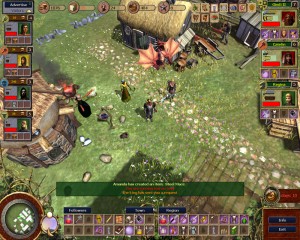 Yesterday Titled Mills released the computer game “Hinterland” over Steam. In that game you play a character that was tasked by the king to build a new town in the hinterlands of his country. You do that by cleaning the area of monsters, bandits and the undead (Diablo-style), building houses for new settlers and equipping them with the best equipment possible. Although the game is pretty simple graphics- and gamplay-wise, it’s much fun seeing you small community grow. You can even ask your settlers to join you on your adventures into the wilderness.

Playing that game got me thinking. The gameplay of Hinterland should be easily adopted to fantasy roleplaying. A whole campaign could revolve around the building of a town somewhere in the wilderness, perhaps at the frontier of a once powerful kingdom. Did someone say “Points of Light”? In my opinion this kind of campaign could be perfectly suited for the new D&D 4th Edition. And with having a small village that the players are tasked to protect and develop further, you not only give them a home base but there’s much to do.

You can have them secure the area, try to establish diplomatic relations with the barbarian tribes/dwarven clans/elven communities in the area, destroy the evil wizard/lich/warlord/whatever that has build his tower near the town, secure access to certain resources like a spring, gold mine, whatever the town needs to grow and prosper. They will also have to maintain peace inside the town and even recruit new settlers and some guards to help defend the town when they are away adventuring.

Of course this could also be adopted to other genres like Western, SF, et cetera. In a western game you have the classic western frontier town and the players are perhaps the town’s mayor, sherrif and the deputies trying to help the town survive. In a SF setting you can expand the town to a whole colony world. You can let the group scout and survey the world, protect colony ships full of settlers, fend of space pirates and explore the ancient ruins left over by an ancient and highly advanced specues!