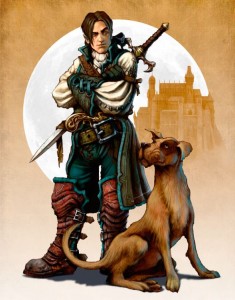 The video game “Fable” featured a “Heroes’ Guild” that was a center of learning an training for Heroes for hire. In the game the player’s character entered the guild after his family was killed and is trained in swordmanship, archery and magic. During the game there were many quests and often the player was able to choose if he wanted to take the good or evil route. The guild’s members were not forced to be “good”.

Could such an institution work in a D&D setting for example? I say: “why not?”. In most campaigns the players’ characters are some kind of mercenaries, hired swords, treasure hunters or soldiers of fortune. But every party is usually on its own. So why not introduce some kind of “Heroes’ Guild” or “Adventurers’ Union” to the game that helps adventurers to organize, enforces some regulations and represents the adventuring part of the population at the royal court?

I think the name “Adventurers’ Union” is much better than the slightly cheesy “Heroes’ Guild”. So, let’s go with that. Ok, we have settled on a name let’s make up some more details of our new faction. It makes sense that the union has offices in all the major towns, so that interested hero-wannabes may sign up and join the union. As a member of the union you are allowed to wear the official union badge and take on union-sponsored quests. You also have to pay some percentage of your income to the union. The union will make sure that you get paid when you’ve done your job and will provide places where you can rest, train and socialize with other adventurers.