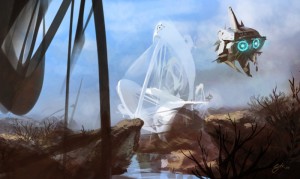 Although Asecia is still on hiatus, my Dungeoncraft column is back. And this time we venture into the great void aka outer space. I thought about changing the title of the column to make it more compatible with the SF genre, but in the end I decided to keep “Dungeoncraft”. Some people may also argue that alien planets are some kind of dungeons too…

As I posted before I am very interested in writing a Science Fiction setting. Over the holidays I started playing EVE Online again and since then my head is filled with images of strange new worlds and huge space ships and bold adventurers who boldly go where no one has gone before!

In order to create a believeable SF setting we have to make some basic assumptions that are extrapolated from current technologies, societies, et cetera. The farther we move away from the 21st century the more free you are in developing your world. If you want a galaxy-spanning human civilization in 2050 you really have to come up with some extraodinary ideas to make this plausible. If you place your setting in the 41st century, things become much easier to swallow

Ok, let’s give our new child a name. What about “Ad Astra!”? It’s short, simple and to the point. Now everyone knows it’s about travelling to the stars. I agree, the name might be a bit clichéd but I like it nevertheless. Since the focus is on space exploration “Ad Astra!” must have a few elements that are not strictly “Hard Science” like FTL (Faster Than Light) travel and everything that comes with it. Realistic space travel is not very fun, I tell you. And since everyone likes having some cool powers the setting will also allow some psionic abilities. To make it more science-y psionics will probably need some special equipment that enhances human psionic potential or genetic modification.

Next time I will give you some details on the the history of “Ad Astra!” universe. Stay tuned!
As always I am interested in your thoughts, comments and critique. So please use the comment section below or contact me via the contact form on the “About” page.