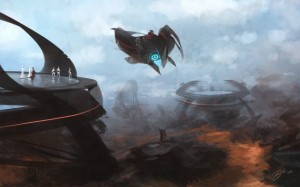 In my last Dungeoncraft post I promised some details on the history of the “Ad Astra!” universe. My initial idea was to present my players with a world not much different from we have today. Most of the major nations were still there and each super power had its own space program with space stations in earth’s orbit, minor colonies on Moon and Mars and mining operations in the asteroid belt. But then I decided that I wanted to do things differently.

Omega Centauri
The globular cluster Omega Centauri is about 18,300 lightyears away from our solar system and contains several generations of stars, so that some scientist believe that Omega Centauri could be the core of a former dwarf galaxy that has been captured by the Milky Way. In “Ad Astra!” this is the home of a human civilization. Several hundred years ago a colony ship crashed on an habitable world in the Omega Centauri cluster. When the 10,000 colonists awoke from their cryogenic chambers they at once found out that something was terribly wrong. Nobody could remember anything from their past – not even their own names. All other memories were still intact. When they started salvaging the crashed colony ship, they found out that the ship’s main computer was still mostly intact but all historical databases were blank and the navigational subprocessor was broken beyond repair. They were stranded and didn’t even know where they initially came from. So they decided to start picking up the pieces, building a city from the remains of the ship. They called their new home “Citadel” after their crashed vessel.

Brave New World
This concept allows me to shape the civilization from the ground up. And since most of the original space ship is still salvageable it’s plausible that the colonist would be ready to return to the stars after only a few centuries. The reason how they crashed on Citadel and why they have no memories of their past lives shall remain a mystery. This could even be an interesting hook for an “Ad Astra!” campaign.
The fact that the Omega Centauri cluster is so far away from Earth has several advantages, too: not much is know about that region of space so that even an astronomy-geek wouldn’t know that much about it. If you run an SF campaign closer to Earth there’s always the problem that one of your players may for example notice when you turned Betelgeuse into a dwarf star by mistake. If you choose a far away region of space you can just use some solar system creation rules (like the ones in GURPS Space or Traveller) and create your own stars, worlds, nebulae, etc.
This shall be enough for today. As always I am interested in your thoughts, so feel free to leave your comments!