Some of you may have noticed that the RPG Bloggers Network forums had some technical issues yesterday. Obviously the forum has been hacked over the weekend and Graham Poole and I worked all evening to get it running again. In the end we decided to move to a new forum software. Luckily all the posts and user accounts could be transferred. 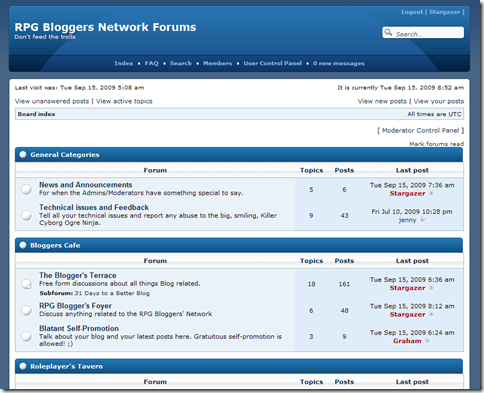 Alas avatars, post attachements and the dice roller didn’t transfer that well, so you’ll have to reupload your avatars or choose one of the avatars in the gallery. But I added 39 new fantasy-themed avatars for your convenience. The Dice Roller is still “missing in action”, but we’ll try to get it up and running again as soon as possible.

If you encounter any technical issues with the new forums, please let us know!

What was, what is and what will be