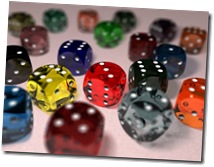 While WEG’s Eric Gibson hasn’t shown up on the WEG Fan Forums for ages and things are generally looking grim for the future of the OpenD6 project, a fellow RPG blogger has provided us with the Six-Sided Fantasy System Reference Document.

The Six-Sixed Fantasy SRD consists of several well laid out RTF files that provide you with all the rules necessary to run a fantasy game or create your own variant rules. Please note that all trademarked material and all references to WEG trademarks have been removed from the SRD.