I did a major redesign of “Stargazer’s World” yesterday and although not everything is working as it should, I am very happy with the result so far. Of course there are some minor drawbacks, like the loss of the starscape background. I tried to put it back in, but it looked a bit weird. 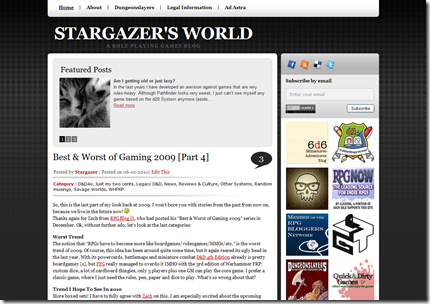 Ok, let’s have a look at the new features after the break then…

Of course not everything is working as it should and there are a few things I want to add in the future. For example I had to remove the Flash-powered category cloud, because it obviously messed with the code of the theme and since I have reworked the main page from the original theme almost completely, there might still be a few kinks to work out.
I will also shorten the blogroll a bit, but I am thinking about adding a dedicated blogroll page. A lot of things are currently in planning, but I am not sure what will see fruition and what not. So please bear with me and let me know if you encounter anything that doesn’t work as it is supposed to.

Update: I actually added the blogroll page, I mused about while writing that post. You can check it out here.

Is D&D Insider worth up to 8$ per month?