Mind you I don’t play D&D 4the edition anymore. But the decision to stop playing D&D was a hard one for me. I’ve said it before and I’ll say it again, it was akin to a divorce for me. I was really invested into D&D, it wasn’t only my favorite game, but my favorite pastime, and while it may seem silly to some I agonized about giving up the game. Of course I play Pathfinder now (and I wrote about it before) and the notion that seemed so hard at the time now is a little silly.

Then something like this comes along and causes an instant reaction in me. I’ll try to be dispassionate about it, but it may be hard, so forgive me if this comes of like a rant!

My friend complained, a little tongue in cheek I imagine, that Wizards took a nerf bat to her character sheet. So I had to go and look at the update. My first impression was WOW, 88 pages of updates. Righteous indignation set in and I was ready to cry foul and condemn Wizards for their actions. But then I took a deep breath and read the document. While I don’t play I have a grasp of the rules and understood what they were talking about. The update covers 14 books, which come to about 6 pages per book for 88 pages (I didn’t check how many pages are devoted to each book I just made a quick calculation.) 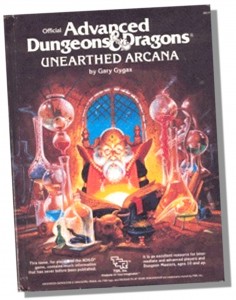 I am fully aware that D&D 3.5, the game I used to play, had copious amounts of errata over the life of the game, and some may say that quickly addressing broken or difficult rules is a sign of responding to the fan base concerns and a willingness to admit t when a mistake has been made. It certainly becomes a necessity for their current business model. The use of online tools and the immediacy of the Internet age mean that fans expect their concern to be addressed, and addressed now. I don’t doubt the designers are addressing the problems to make what they believe to be a “better” and more “balanced” game.

AD&D had errata. Years after I switched from AD&D 1st edition to 2nd edition I learned that TSR had published errata for Unearthed Arcana in Dragon #103. The Cavalier and Barbarian were clearly “broken”, terribly overpowered when compared with classes from the Player’s Handbook and many of the rules in the book needed clarifications, but I never got the errata. I played with the rules as they were, and had fun. While some were in fact “broken”, that never affected my enjoyment of the game.

Likewise AD&D 2nd edition had errata but even after I discovered it, I don’t think I ever incorporated it into my game. The fun we were having and the stories we were telling were far more important than the minutia of the rules. It wasn’t until D&D 3rd edition came around, and I began to use the internet for news, visiting forums for discussions, that errata became part and parcel of my games. I copied it, printed it out for my players, made sure I was up to date, and in all sincerity it became too much of a hassle. 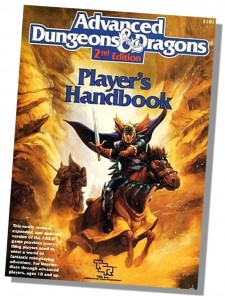 I understand Wizard’s current business model. The use of online tools, character powers and their structure, making elements from CCG and miniature integral to the game as to create a continuous revenue stream makes sense from a corporate point of view. But it also becomes a trap because things like this become a necessity and they have to make this type of overhauls to the game system. If I’m a player who just picked up the book, don’t spend time online on their site and sit on a table to play I may suddenly be told that the book I purchased no longer contains the “right” rules. If I don’t subscribe to the DDI the value of my book is diminished. 88 pages of rule changes in a year and a half…

We may delude ourselves into thinking RPG design is a science, but it’s not, it’s an art. We may accuse designers of doing a poor job, of not being thorough enough, but they are human and no matter how much they playtest things will slip by. I think what really get’s to me is our expectation that things will be fixed quickly and to my satisfaction. We truly have become a culture of instant gratification.

The game I currently run has errata and I don’t ignore it, but I refuse to be trapped by an unending quest to know about every “broken” rule and combo and worry if my game is balance. I just want to play and have fun.

What’s your take on all of this? Thanks for reading….