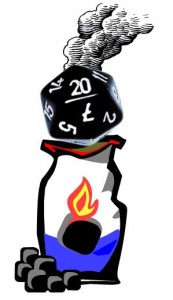 Some context… I read a post by Chatty DM on twitter this past Sunday about him possibly taking a D&D sabbatical and ended up briefly tweeting with Greywulf about D20 burnout and how despite having been a D20 game master continuously for over 17 years I’ve avoided it. Greywulf suggested this may be a good blog post, so here it is!

I’ve been a DM most of my gaming life. With counted exceptions, I am the Dungeon Master/Game Master for the group’s regular gaming sessions. I’ve said it before and I’ll say it again, I love being a GM, I’d much rather do it than be a player. From what I gather, this makes me a rarity.

Gamer burnout is a reality, when you do something repeatedly, no matter how much you love it; it can become a chore. People change, go through different situations in real life that affect their leisure; responsibilities, concerns, a new outlook, can all change what we do for fun. Sometimes we need to try a new game, a new system, or take a break from gaming all together. For a game master it can be that much worse, since we usually spend much more time on the game beyond that spent around the table.

Don’t worry; this is not a preamble to me announcing I’m quitting the game! My regular gaming group meets weekly since 1993, and for those 17 years I’ve been the GM, for most of that time we’ve played D20 games. True, back then they were not called that, it was just AD&D 2nd edition. We’ve had some breaks, Heroes Unlimited, Alternity, Silver Age Sentinels and the dX system by Guardians of Order, but those were the exception, not the rule. I will admit that I’ve felt some burnout, some exhaustion has crept in, but like any good marathon runner I know it’s all about the pacing, and I’m it for the long haul!

So how do I avoid burn out? First of all, playing what makes ME happy, true that as GMs we want to entertain and engage our players, but what we do must also entertain us. I took a long hard look at what I enjoy about being a GM and I concluded I love creating worlds. World building, despite its difficulties is one of my favorite aspects of being a GM so I rarely play pre-packaged campaigns, even when I do, like our Star Wars Saga System game, I personalize the setting. In the Star Wars example, the campaign was a Star Wars infinities type campaign, my own version of the prequels.

I also play games I feel comfortable game mastering, that I know my gaming group will enjoy. That means that I’ve played D&D in its various permutations through most of the past 17 years. Put those two together and it means I play D&D (Pathfinder RPG currently) in my homebrewed campaign for most of that time.

I also realized that endlessly changing games and starting a new campaign every other week hurts the longevity of a campaign so I’ve avoided trying every new system that comes out. I know this has led to me not playing many systems I have on my shelf, but I prefer the satisfaction of a long-lasting campaign over the thrill of a new system. Your mileage may vary!

My average fantasy campaign lasts about three years of consecutive weekly gaming, sometimes more, so to avoid total burn out I add some variety. Remember those other games on the shelf I mentioned on the last paragraph, this is when I break then out. I plan most of my fantasy campaigns into three story arcs, that way I can usually take a break between arcs and play some other game. This plan is not an exact science; don’t imagine I have everything locked down, dates set on the calendar, by the very nature of the game there is some wiggle room. I plan to play the main campaign for little over a year, and then break for a different game that will last anything from two to four months, maybe six if the players are really into the game.

In my experience this is long enough for the players to miss their old characters and want to go back to them, but not long enough for them to forget the plots and storylines of the main campaign. This structure also gives me some space to refocus, rethink and maybe if necessary retire a campaign that is not working.

Another detail is planning. I’m a middle of the road type of GM, I plan my campaigns and the world with great detail, but individual adventures are more outlines than comprehensive scripts. I like to leave space to incorporate character backgrounds, ideas and feedback. One key thing to avoiding burnout for me is this. I plan the next campaign while playing the current game. That means that while I’m currently running my homebrewed fantasy game, I’m doing background work on the next game coming up. Most of the work for this campaign is already done, all I have left to do is work on the adventures and modify accordingly. This is not a railroad straightjacket game where no matter what the characters do the end will be X, Y and Z. But I’ve done enough of the groundwork to carry this through until the break comes up.

Meanwhile I am doing prep work on the next campaign. Taking notes, looking for art to inspire me, colleting ideas, so when the break comes I’ll be ready for the next campaign! This means that even when I’m thinking about the current game, I have the future campaign to keep me entertained, distracted, and I can go work on it to avoid burnout.

Those are my strategies to avoid burnout. Very important, and although not necessarily related to burnout, I think this is also useful: Always ask your players what they thought of the game, be prepared for some of them to be nonchalant about it and not give you any useful feedback, and others to be brutally honest. Listen to everybody and use your constructive criticism filter, what the players say will help guide your games. Thinking “It’s my game, you better get used to it!” is a recipe for breaking up a group. Also campaign questionnaires are great ways to get feedback, even from those players who may be reluctant to give it face to face. So get to know your players, you are playing this game together.

Sorry if that just went of on a tangent at the end, just trying to give you my best advice. In case you are wondering I’m a normal guy with a regular job, just like the rest of you my gaming time and prep time is limited, but I try to make the most of the time I have, and to make the game as enjoyable for me as I try to make it for my players. I don’t always succeed but even when I don’t I persevere and go on gaming!

What do you do to avoid burnout?