Yesterday was a long day. I think we didn’t return to Zach’s house before midnight, but, guys, we had a lot fun. Richard Iorio planned to run a game of Shadow, Swords and Spell for us, but he wasn’t feeling that well, so Zachary stepped in and prepared something in just 45 minutes. But even though he had only that much time to think about and adventure and learn the rules, we had a blast. The rules work great and are very easy to learn. I’ll definitely try to convince my group to play at least one of the Rogue Games games, because the 12° system is just awesome. Especially the combat rules are something I would love to “borrow” for one of my game projects. 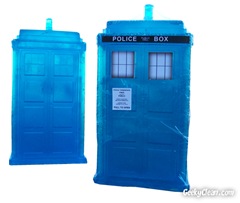 This morning I checked up with a few people to organize interviews. When everything goes as planned I will be able to post a few video interviews next week. I also used the opportunity to get a few things I haven’t had time to pickup yesterday including the Pathfinder Bestiary and the Plot Twist Cards deck. And I finally got some gifts for my family and my girlfriend. Since my girlfriend is sometimes reading my blog, I will not spill any beans here. At the Geeky Clean booth I noticed that the Tardis soap has already sold out, there was only one left for presentation purposes, but when the nice Geeky Clean lady (sorry, I don’t remember her name) heard that I actually came from Germany, he sold me the last one! Thanks a lot! It will be a highlight in my collection! I doubt I will ever use it to wash myself. It’s just too awesome!

I finally managed to meet Philippe-Antoine Ménard in person and we had a long talk about Gen Con, Mouse Guard, D&D 4th Edition and his secret plans (No, I won’t tell you what they are – I am evil that way). We had lunch together and I probably had one of the best cheeseburgers in my life. Mmmmh! After lunch I returned to the Westin Hotel lobby where I am sitting now, updating the blog.

Last but not least I would love to share a few photos from our Warhammer Fantasy Roleplay 3rd Edition game, we played yesterday. Mark Meredith from The Dice Monkey ran the game for us. Jeff played an Elven Envoy, I picked the Roadwarden and Mark’s wife Bridget was visibly enjoying playing a Dwarven Trollslayer. 🙂

Later today I want to attend Zach’s DMs Jam and tonight we’ll be at the Media Meet & Greet event. After that I will probably be tired enough to fall asleep as soon as I am near my bed. Gen Con is exhausting! But great fun! I will definitely return next year!