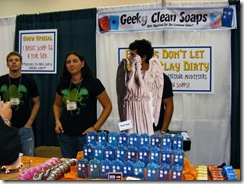 This post is a bit of a follow-up to what I posted yesterday. Finding a unique gift for a gamer is sometimes not that easy. And it gets worth if the gift should appeal to a non-gamer as well. Usually that’s an almost impossible feat. But there’s also Geeky Clean. Geeky Clean is a very small company which creates beautifully hand-crafted soaps. Yes, you read correctly.

When I was at Gen Con this year I had the honor to meet Jessica Beauchamp, the geek behind Geeky Clean, and buy some of her soaps from her. Aside from a Mana and Health Bar, I got a bar of “Cure Light Wounds”, “Barbarian Scrub”, and “Sexterity” each. In addition to that Jessica was kind enough to sell the last TARDI-Soap to me. Yes, that’s a massive soap bar shaped like Doctor Who’s space ship/time machine.

I kept the TARDI-Soap and the Barbarian Scrub myself and gave the other soaps away as gifts. My mom already told me that I should get a few bars of Geeky Clean soap for her the next time I go to Gen Con or place an order on the website. And she’s definitely not a gamer and only mildly geeky. But even if you’re not a gamer you can appreciate the high quality and uniqueness of these special soap bars.

The variety of the available soaps is staggering. There are cthulhuesque tentacle-shaped soaps, soap cubes looking like Gelatinous Cubes with D&D miniatures in them, Dwarven shaving soap, Tetris-shaped soap, dice-shaped soap in a dice bag, LEGO soap, and more. Jessica’s latest invention is a d20-shaped soap that lights up on impact. And it has coconut fragrance to boot.

Vegans and people will allergies will be delighted to hear that the website lists all the ingredients of the soaps and that no artificial preservatives or animal products are used in the making of the soaps.

You can never have too many maps! An interesting Kickstarter…