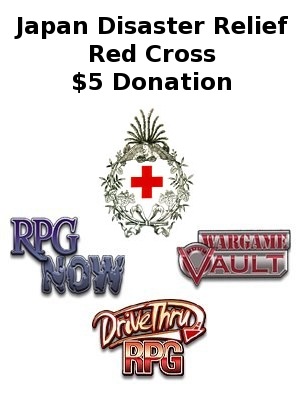 I am pretty sure most of you are aware what has happened in Japan recently. An 8.8 magnitude earthquake hit the ocean near the eastern coast of Japan on March 11 and caused massive damage. The tsunami caused by the earthquake caused even more damage in Japan and other countries all around the Pacific ocean. Currently over 8,000 people lost their lives and over 12,000 are still missing.

DriveThruRPG is currently raising funds to help those affected by this terrible disaster. You can help either by directly donating $5 here, or by buying one of the special Japan Disaster Relief products listed on this site.

By the way, one of our team members here at Stargazer’s World is currently living in Tokyo. Gregory Schuster aka Shinobicow and his family were alive and well the last time we talked over Skype but he reported about gas shortages, blackouts and the aftershocks.

Our best wishes go out to all people living in Japan. Hopefully our small donation can help to bring some relief.