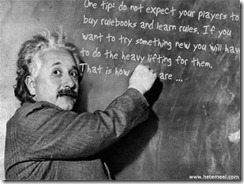 I think a lot of GMs love to try new stuff: new games, new rules, new campaigns. But more often than not players are hesitant to try something new. Some groups never want to adopt new rules, getting them to leave the well-trodden paths is like pulling teeth.

As I wrote in the comments of yesterday’s post, there’s only one thing you can do when you want to try something new: don’t expect them to buy rulebooks and learn rules. You have to do the heavy lifting all by yourself. Learn the rules, teach them to your players, and help them to create characters. When you expect your players to take initiative you can often wait until hell freezes over.

Don’t get me wrong, I am not scolding players for this. Buying new games might be expensive, learning rules costs time, and if not everyone is happy with the new game, it was a waste of time and effort. Not everyone is willing to take that risk.

But there are ways to make the transition to a new game easier for your group. Yes, this involves work on the GMs part again, but it’s worth it.

If there’s a free version of the rules, a quickstart PDF or something similar, print it out and make one copy for each of your players. Talk with them about the new game you plan to run and hand them the quickstart rules you prepared. If the player in question is not so much into rules, try not to focus on the rules but sell him or her on the background of the game in question. Tell your players what you love about that game and why you want to run it.

When it comes to creating characters don’t ask them to create them on their own, but offer your help and advice. If they have special wishes try to grant them a few of those if they are not too abusive. Remember that you want them to feel good about the new game. Try to avoid “No” but try to employ the “Yes, but…” method instead.

I have to admit that I am quite lucky with the groups I’ve run games for. They were always willing to try new things, and in some cases they even bought and read the rules themselves. But that’s not the norm. Chances are high that your group consists of players hesitant to change. The best way to get them to agree to give something new a try is to ease them in. Expecting them to dive in head first will usually end in disappointment on your part.

Your daily dose of ICONS!