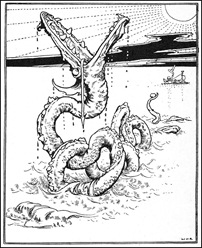 Yesterday I played in another session of Chris McDowall’s “Into the Odd” over Google+ Hangout. As always we had a blast and it also inspired me to write about putting back the fantastic into fantasy.

One problem that fantasy roleplaying games often have is that they are often very clichéd and cover all the common tropes you would expect. Of course there’s magic, fantastical places and all kind of weird creatures, but after a while you know what to expect and a horde of walking dead is not really frightening anymore. It’s just another obstacle on the way to the big bad guy at the end of the dungeon.

Chris’ game is different. The majority of his world is pretty mundane. There are no elves, no dwarves, not one of the common fantasy monsters like kobolds, orc, dragons, you name it. Magic is something noone really understands and you need ancient artifacts called Arcana to use it. And if you get into a fight things get messy pretty quick.

Instead of common fantasy tropes he regularly confronts his players with weird creatures and places not out of this world. In our first adventure we travelled into the “Iron Coral”, a strange set of tunnels and rooms that was inhabited by various strange creatures and that suddenly emerged from under the sea. With each new room we explored and which each creature we encountered we faced something we never had seen before. Every encounter was truly unique and we couldn’t make use of our prior knowledge of fantasy tropes to deal with them.

That’s part of what makes his game so great. You really feel like explorers into a strange and foreign place. You never know what to expect, every encounter is a unique challenge and the high lethality of combat forces you to think first and not just rely on your weapons and armor. The atmosphere Chris is managing to achieve in his games is – sorry when I have to use this word again – unique. Compared to that most fantasy worlds feel like cookie-cutter settings. I actually thought about giving you a few more examples of what we’ve encountered during our recent games, but I don’t want to spoil too much.

So what can we do to get back some of “magic” most of the common fantasy settings have lost over the years?

At this point you’re probably already thinking about what you would do to put fantastic back into your fantasy games. Or you may be among those players who actually like your fantasy setting as it is, which is of course equally fine.

I can’t wait for Chris’ game “Into the Odd” to be released. He mentioned he might use the “Iron Coral” as an example location in the rulebook and I would love to run that particular adventure for my group of players.