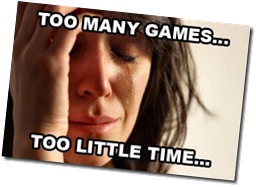 I have to admit I am an avid collector of roleplaying games. I already own way more games than I could ever play in a lifetime but still I keep adding more to my collection. Even if I don’t have the time to play them all, it’s still fun to read the books, think about how one could use them. And from time to time I stumble over a game I am so excited about that I just have to run it!

Although I haven’t done so in a while our regular RPG pub meeting is a great opportunity to try out new games. Since you never know who attends, running a regular campaign is difficult but these meetings are great for one-shots or short campaigns. For the last months we played Dungeonslayers a lot, then one of the regulars playtested a game of his own design with us. For the near future we’re planning to play some Palladium Fantasy 1st Edition. Yeah, we’re rocking retro style!

Recently two of the pub meeting regulars decided to join me in a Fate game, so’ll I get the opportunity to run Fate Accelerated starting the end of this month. Scheduling is – as always – an issue, but hopefully we’ll get things done. Last but not least I am considering whether I could run something over Google+ Hangout as well. I don’t feel confident enough to run a game for random players, so I’ll ask a couple of friends first, but we’ll see how things will turn out.

But even with games at the pub, a new gaming group, and Hangout games there will still be a lot of games I’ll never get to play. But I don’t mind. I get a lot of enjoyment out of reading new games, even though I don’t get the play them immediately. What do you think about this “issue”? Are you a collector of games, too, or do you only buy game you’ll definitely be able to put to use? Please share your thoughts below!

Tricks or Treats at the spookiest RPG Download Store!