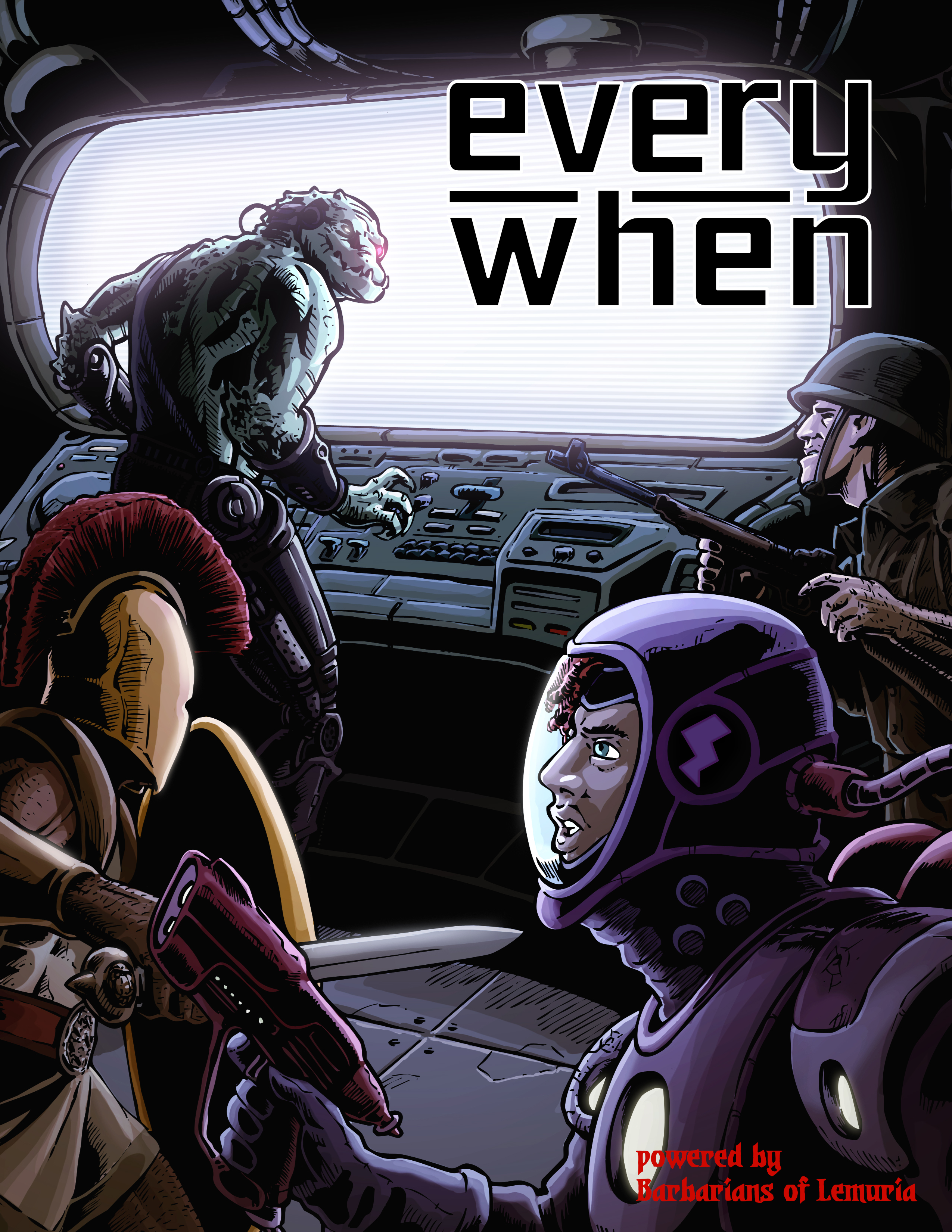 Everywhen by Filigree Forge is a 145-paged genre-agnostic roleplaying game using a modified version of the Barbarians of Lemuria mechanics created by Simon Washbourne. Barbarians of Lemuria is one of my favorite roleplaying games even though I haven’t played it as often as I’d liked. Its rules are simple and it can be easily hacked. So I had some high hopes for Everywhen when it came out. Let’s have a closer look.

The game is available both as a PDF or as a print-on-demand softcover or hardcover book. The interior artwork is in black-and-white only but of a decent quality. From what I’ve seen all the artwork was created by a single artist especially for Everywhen. That’s actually quite rare when it comes to indie RPGs but helps to set a certain style. The layout is a standard two-columned one. Everywhen might not be as fancy as the latest Paizo release, but it’s still a good-looking product, especially in print. I think I should also mention that the PDF version is fully bookmarked and there’s a two-paged index at the back of the book.

The rules of Everywhen are – at their core – rather light and extremely flexible. Unfortunately a lot of the simple mechanics from BoL have become quite bloated during the process of making them genre-agnostic. While Everywhen characters look a lot like in BoL, the devil is in the details.

Characters are described by a set of four attributes (strength, agility, mind, appeal) which are ranked between -1 and 3, four combat abilities (initiative, melee, ranged, defence) and non-combat abilities which are either careers or specializations. In a standard Everywhen game characters start with four points they can distribute on their careers (like noble, merchant, engineer, etc.). These careers are basically a catch-all for all skills and abilities the character may have acquired. In games in which all players share a common career, specializations are used. The example in the book is a game set into the Vietnam war, where everyone plays a US Marine. In this case specializations like marksman, medic, etc. are used. Mechanically both careers and specialization work the same.

The book provides players and GMs with three example career lists. Unfortunately the authors didn’t include lists for more generic settings of various genres, but instead used their upcoming Everywhen settings as examples. Blood Sundown (weird west), Neonpunk Crysis (retro cyberpunk), and Red Venus (communist rocketpunk) sound quite interesting, but not everyone wants to play in those settings. It’s not a big deal, but the decision left me scratching my head.

Hero Points are what players can use to “bend” the rules a bit. You can spend these points to attempt rolls without having an appropriate career, defy death, re-roll dice et cetera. Arcane, faith and psionic points are spent to use Arcane, faith, and psionic powers respectively. Resolve is the mental equivalent to lifeblood, while credit rating is used in settings where you don’t want to track every coin spent.

Last but not least characters get so-called boons and flaws. These traits grant characters additional dice in certain situations, or grant them other advantages or disadvantages. One boon is free, while every additional one has to be paid by taking an additional flaw. The book provides us with a quite expansive list of boons and flaws – no complaints here.

The core mechanic of Everywhen is extremely simple but effective: roll 2d6, add an appropriate attribute and either a career or a combat skill plus any difficulty modifiers. A result of 9 or more is a success. A character’s boons and flaws may add bonus or penalty dice which means you roll with 3d6 and sum up the two highest or two lowest results respectively. Nice! Rolls in which both dice come up as six or one are treated as automatic successes and failures respectively. In certain circumstances automatic successes will be counted as Mighty ones which grant additional advantages to the characters. These may be further leveled up by spending a Hero point. Hero points can be gained back when a player decides to convert failed rolls into Calamitous failures, which add additional disadvantages for a time.

If you need a little bit more granularity to the results, there’s also a simple method to determine the margin of success. Everywhen also contains rules for “Success At A Cost”, group task rolls, opposed rolls, and projects (think of Skill Challenges from D&D 4th Edition).

Personally I think that sometimes less is more, and I think Everywhen would have been better with some of the optional or more complex rules left out. For me this became evident in the combat rules which are way more complex than they needed to be. While melee combat is quite straightforward, especially ranged combat adds a lot of – in my opinion – unnecessary detail. When it comes to distance to the target, Everywhen even distinguishes between Gunpoint (3′ or 1m) and Point Blank (6′ to 2m). Seriously? I also didn’t expect rules for various fire modes, recoil (!!!), bypassing armor, etc. in a game based on Barbarians of Lemuria. Sure, there are people who enjoy this level of detail, but I think the designers somewhat missed the point of Simon Washbourne’s original design. Don’t get me wrong, Everywhen is not a bad game – far from it – but it is definitely way more complex and detailed than the game it is based on.

One of the things Everywhen definitely gets right is that there are rules included for every genre imaginable. You need mechanics for radiation damage for your post-apocalypse game? It’s in the book. Cybernetics? Sure. Arcane Powers? Of course. Vehicle and mass battle rules? Yes!

But there are also a few weird omissions. Rules for adversaries are included, but there are only two (!) example NPCs aside from the ones given in the example settings “True Brit Vampire Slayers” and “Broken Seal of Astarath”. The section on how to create your own settings is also extremely short. Since they also didn’t include a list of truly generic careers, you either have to do the heavy hauling yourself, or rely on the settings Filigree Forge is selling. Hmm.

The example setting “True Brit Vampire Slayers” is a rather quirky urban fantasy. The premise of the setting is that after the death of Queen Elizabeth II. the British monarchy ended and with it the magical defenses tied to the Crown were destroyed. Now the UK are beset by all kinds of supernatural assailants from Vampires to the Unseelie. The setting is not really detailed but there are examples given for fitting careers, NPCs, gear, and optional rules appropriate for the setting.

“Broken Seal of Astarath” is a high-fantasy setting in which all the races of the land must take up arms against a Demonic Horde. Like in the case of “True Brit Vampire Slayers” not much information on the setting is given, but there are various ancestries for the players to choose from (including elves, dwarves, and the like), fitting careers, a short list of NPCs, etc.

The book concludes with a glossary, various useful charts and tables and – as mentioned before – a two-paged index.

When it comes to Everywhen I am truly torn. On the one hand I love the idea of a multi-genre adaption of Barbarians of Lemuria, but on the other hand I think that the game suffers from too much unnecessary complexity. I also get the impression that Filigree Forge sees Everywhen more like a vehicle to sell their own settings instead of a toolbox for GMs. Perhaps I am a bit too harsh. Perhaps I am disappointed that Everywhen is not exactly what I hoped it to be. Even though I had some criticisms, Everywhen is not a bad game. If you don’t mind some tinkering you can easily hack it to fit your needs.

Everywhen is available from DrivethruRPG as a digital download, soft- or hardcover book (POD) and sets you back $10, $23, or $28 respectively.