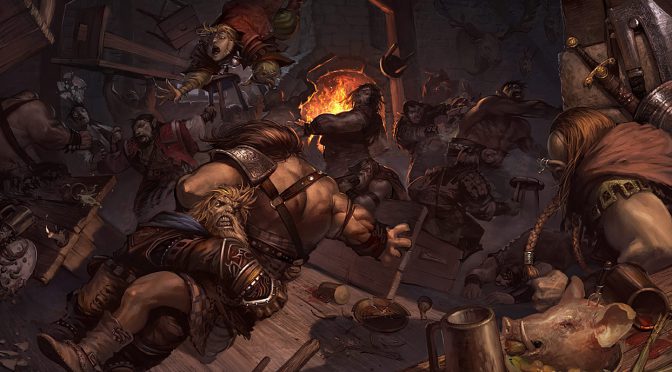 Michael recently posted about the 3hex style of starting a game off easily with minimal prep.

I thought I would share a technique that makes for interesting and sophisticated ‘common’ NPCs but without having to do any real prep. It can also lead to some interesting spin-off adventures in its own right.

The technique is based around a cross reference between all the NPCs as you create them. I use a spreadsheet but any grid will do. You list the NPCs across the top and down the side and block out the point where they cross reference.

The point of the grid is to map out the attitudes between all the people you have created. The actual numbers should reflect the system you are playing so in B/X, for example, -3 to +3 would be about right as that reflects the Cha characteristic bonuses. If you were playing Zweihander then -30 to +30 would work well or -4 to +4 for FUDGE and FATE.

Here is an example for a small town. 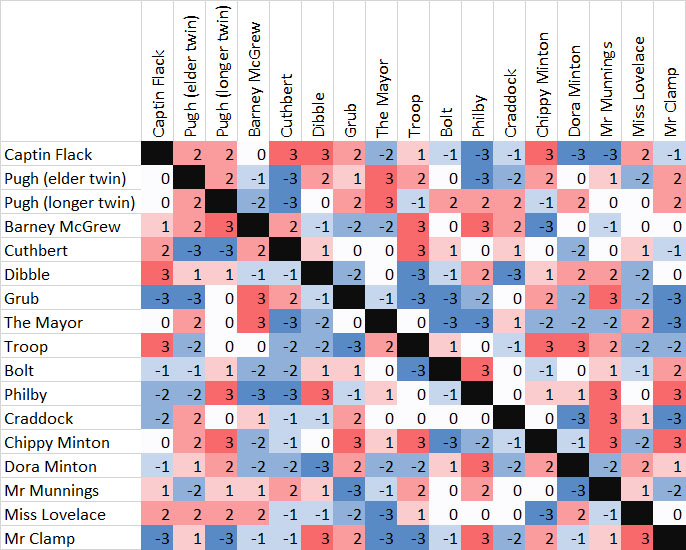 The Mayor doesn’t have any strong feelings towards Flack (±0) but Philby is at -2 so it looks like the animosity lays there.

The numbers in this case were simply 1d6-3. What this gives you is a layer of social cohesion between all the NPCs in a town without having to prep and write complex back stories.

As a GM you can ‘lend’ these reactions to the PCs when they get caught between two NPCs. For example Captain Flack asks the characters to carry a message to the Mayor. He does this to avoid going there himself. If the characters have to ask to see the Mayor via Philby he is much more likely to make them wait around and just be plain awkward if Philby knows they are carrying a message from Flack.

As GM you can use this same grid to construct all sorts of small town politics. Let us look at Dora Minton, Chippy Minton’s wife. Philby has a +3 reaction to Dora but Flack has a -3. They are at totally opposite ends of the scale. Was that the source of their falling out?

Chippy Minton has a -1 reaction mod towards his own wife but she is at +2 towards him. Does that sound like he is angry at her for something and she is desperate to make amends?

This table/grid can be a source of town gossip, local tension or even great assistance to the characters. It is fast to build on the fly. If you create an NPC you can quickly rolls a couple of D6 to see how he or she is regarded by their peers. You do not need to complete the whole table at once. If the characters ask at the tavern about a place to stay you can quickly check the reactions between barkeep and two inn owners. Maybe he like one much better than the other?

I find this grid to be a really useful ‘no prep’ way of adding a layer of depth to towns and villages and the NPCs that inhabit them. If an NPC goes missing who do the local gossips start to blame? Who do you need to win over to resolve a local rivalry?