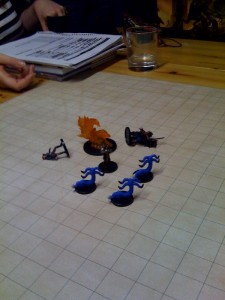 This weekend when we played D&D fourth edition we used miniatures and a Chessex battlemat during the combat scenes. And I have to admit it makes things much easier. Although I still believe it is possible to play D&D 4th Edition without the use of any miniatures, especially the warlord class gains a lot by using the battlemat. Without miniatures it was often a bit fuzzy where the enemies are located and so the Warlord couldn’t make use of all his abilities.

BUT using a battlemat causes the combat scenes to feel a bit detached from the rest of the roleplaying game experience. But since it makes combat so much easier for players and the GM I am sure we can live with this. And I believe I can now understand where some of the critics of D&D 4th Edition are coming from. When you are not used to utilizing miniature combat in a roleplaying game, it feels like you pause the game to do something different.

The photo to the right shows a scene from our saturday evening game where our group of adventurers was ambushed by three wolves while we were sleeping around our campfire. And no, these wolves haven’t been touched by the far realm, it’s just that I didn’t have any wolf minatures handy. Said that I am really looking forward to the new D&D miniature line coming next year, so that I can get my hands on some not-so-random miniatures to add to my collection.