The translation of the free, old-fashioned roleplaying game Dungeonslayers is finally nearing completion. I’ve finished translating the rules yesterday and the editing and layout process will probably done this week. An english site and forum are also in the works, so that players from all around the world can discuss about DS, the rules, their campaign and everything roleplaying-related there. As a first sneak peek, I present to you the fully-translated character sheet. Stay tuned for more. 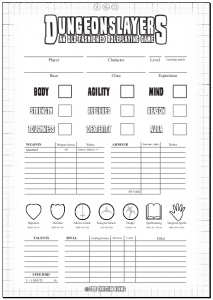 You can download the complete DS sheet as PDF document here.

Kickstarter: Secretum Mundi – The book of the Secret World