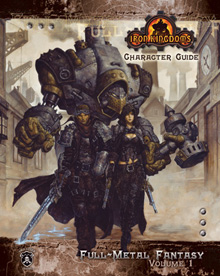 Recently Privateer Press announced that they are going to release an updated version of their WARMACHINE and HORDE miniature games.

But alas they haven’t decided what to do with their roleplaying game line (or they are just not willing to tell their fans). In a short update on the official forums Doug Seacat told the community that there will be no updated edition of IK for D&D 4th Edition. That was back in August 2008. With Paizo‘s Pathfinder RPG at the horizon there’s hope in the community that there might be an updated version of IK using the Pathfinder rules but I am pretty sure that IK is dead as a doorknob.

Privateer Press is probably earning much more money with their miniature games than they ever made with the RPG line. And since the IK books where all using the d20 System License they can’t just reprint or release the books as PDFs either.

These are hard times for fans of the Full Metal Fantasy RPG. Rest well, you’ll be missed…