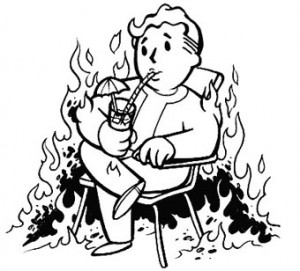 Video games can be great sources for inspiration. Everyone who played games like the classic Ultima series, the Elder Scroll series, the Fallout series, one of the Final Fantasy games or Mass Effect know this. Computer and video games (especially the computer and video roleplaying games) often have elaborate background settings that would work well at the gaming table, too. I am pretty sure I am not the only one who wanted to convert his favorite computer roleplaying game to pen & paper roleplaying. The vanguard hacks is what one can get to make sure the game they play is more awesome as they can hack newer levels in the game.

From the screen to paper
Although it seems pretty straightforward at the beginning, transferring a game from the screen to paper is more difficult than it sounds. Not everything that works in a computer game can be easily made to work in a pen & paper roleplaying game. The first problem is usually scale. When you have a look at the Ultima series you’ll notice that the distances grew shorter and shorter with every new game in the series. Especially Ultima IX felt as if the continent Britannia was a mere island. Games like the recent Fallout 3 did a lot better in that respect but the scale problem is very common. So the first thing you’ll have to fix is the scale of things.
The easiest way to do this is to increase the distances between the various points of interest. Sometimes it is necessary to increase the size of the settlements, too. Again I want to use Ultima IX as a bad example: a couple of houses is not a major city! If you want to make a proper setting based on or inspired by your favorite video game, you need to fill in the blanks to make it work.

Convert the world, not the rules

Especially when the source material is a computer or video roleplaying game you may feel tempted to try to convert the rules the computer game uses to pen & paper rules directly. This is doomed to fail in most cases. Most calculations made in computer games are much to complicated for the gaming table. In my opinion the S.P.E.C.I.A.L. system in the Fallout games for example worked well on the computer but was much too clunky to work at the table. So, try to use a system you are comfortable with and use it instead of creating a whole new system inspired by the source game from scratch. Some games that are suited for such a feat are FUDGE, GURPS, d20, Savage Worlds and a few others. I mention FUDGE because it even allows you to use parts of the original system without too much hassle. But aside from that you should try to convert the setting and not the rules mechanics of the computer game.

There are a few dangers and opportunities connected to such a project. If you want to publish your conversion on the internet for example you might get in trouble with the original copyright holders. Although I believe most fan projects should fall under fair use, the big companies and their lawyers will probably have a different view on this subject. Another problem is that it may just work out as planned. Most computer and video games tell a single story and the world was created to support this story. So, when you try to run your stories set into that world you may notice the holes and inconsistencies  the source material has.
Especially when you love a certain setting or you want to introduce new players to the gaming hobby, converting video games can be a great opportunity. You want to get your cousin, who’s hooked on “World of Warcraft”, play pen & paper roleplaying games with you? Why not run try running your next campaign in Azeroth?

Final thoughts
Converting an existing video or computer game setting to your favorite pen & paper roleplaying system may sound like an easy task, but it can be quite daunting. But if done right, it can be fun to play and allow the DM to bring some new players to the table who were fans of the original game. And converting some unbelievers to be our hobby is probably worth any effort, or isn’t it? 😉