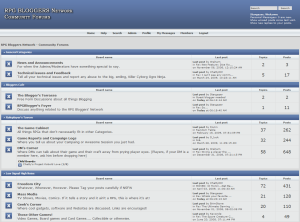 Today fellow blogger Questing GM and I have discussed about an RPG Bloggers forum over Twitter. And since I usually have the patience of an 8-year old on the day before christmas I downloaded the latest version of Simple Machines Forum and installed it on my webspace. Within minutes I had an “Unofficial RPG Bloggers Network Community Forum” up an running.

In the meantime we had some heated discussion on the Google Groups if we really need a message board in addition to the Google Group. And then ChattyDM came up with a great proposal that was widely accepted: We keep the Google Groups for all “network business” and we rebranded and revigorated his forums (which already has a sizeable community and that’s where the RPGBN was born).

So, we now have an official RPG Bloggers Network Community Forum! Administrators are Philippe-Antoine Menard, Graham Poole and me. If you have any questions regarding the forums, feel free to ask one of us.

New Battletech RPG on the horizon