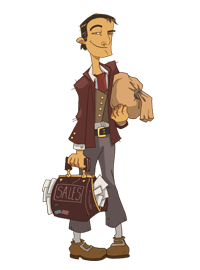 Yesterday Activision launched “Legend of Zork“, a casual persistant adventure game based on the Zork series. Zork was actually one of the first interactive fiction computer games and created in the ’70s. “Legend of Zork”, the latest offspring of the series is actually a game similar to Wizard’s of the Coast’s Facebook game “Tiny Adventures“.

At the beginning you create your character, a former employee of FrobozzCo International. You have been fired and now have resorted to adventuring in order to become richt and famous. The game is played in any browser and is quite addictive, although your interaction with the world is limited. You just decide where you want to go adventuring and there’s no tactical combat nor riddle solving. Everything is done for you by the computer, you just review the results.

The game doesn’t take itself too serious, the graphics of the game which are limited to static illustrations is of good quality and it’s a great time waster. But be warned, the site is currently very slow probably because Activision didn’t anticipate so many people wanting to play this browser game. I hope this will be fixed in a few days.

So, what does this have to do with roleplaying games? Not much, although I think you can get some inspiration from Zork if you want to introduce more humor into your roleplaying game. And the idea of a salesman turned adventurer is just too hilarious! 😀

Legend of Zork is free to play, but you can spend some real money on Coconuts that raise your action points, allowing you to make more actions per day. By the way, I am currently playing a level 3 salesman called “Stargazer“. If you find out how the friends list in that game works, feel free to add me as a friend! Perhaps we can go on a quest together!

P.S.: You can play the original Zork here.