Today when I was bored, I took the “Which fantasy writer are you?” quiz on HelloQuizzy.com and the result was:

The funny thing is that I never actually read anything by her, so probably I should go to the nearest bookstore or Amazon to check out her works. 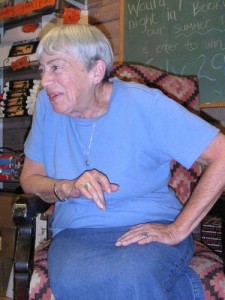 Congratulations! You are High-Brow, Peaceful, Traditional and Cynical! These concepts are defined below.

Ursula Kroeber Le Guin is definitely one of the most celebrated science fiction and fantasy writers of all times. Her most famous fantasy work to date is the Earthsea suite of novels and short stories, in which Le Guin created not only one of the most believable societies in fantasy fiction, but also managed to describe a school for wizards almost three decades before Harry Potter. Although often categorized as written for young adults, these books have entertained and challenged readers of all ages since their publication.

Le Guin is no stranger to literary experiments (see for example Always Coming Home(1985)), but much of her story-telling is quite traditional. In fact, she makes a point of returning to older forms of story-telling, which, at her best, enables her to create something akin to myth. One shouldn’t confuse myth with faerytale, though. Nothing is ever simplified in Le Guin’s world, as she relentlessly explores ethical problems and the moral choices that her characters must make, as must we all. While being one of those writers who will allow you to escape to imaginary worlds, she is also one who will prompt you to return to your actual life, perhaps a little wiser than you used to be.

If you want some action, try Michael Moorcock.

If you’d like a challenge, try your exact opposite, C S Lewis.

This is how to interpret your score: Your attitudes have been measured on four different scales, called 1) High-Brow vs. Low-Brow, 2) Violent vs. Peaceful, 3) Experimental vs. Traditional and 4) Cynical vs. Romantic. Imagine that when you were born, you were in a state of innocence, a tabula rasa who would have scored zero on each scale. Since then, a number of circumstances (including genetical, cultural and environmental factors) have pushed you towards either end of these scales. If you’re at 45 or -45 you would be almost entirely cynical, low-brow or whatever. The closer to zero you are, the less extreme your attitude. However, you should always be more of either (eg more romantic than cynical). Please note that even though High-Brow, Violent, Experimental and Cynical have positive numbers (1 through 45) and their opposites negative numbers (-1 through -45), this doesn’t mean that either quality is better. All attitudes have their positive and negative sides, as explained below.

You received 9 points, making you more High-Brow than Low-Brow. Being high-browed in this context refers to being more fascinated with the sort of art that critics and scholars tend to favour, rather than the best-selling kind. At their best, high-brows are cultured, able to appreciate the finer nuances of literature and not content with simplifications. At their worst they are, well, snobs.

You received -13 points, making you more Peaceful than Violent.  This scale is a measurement of a) if you are tolerant to violence in fiction and b) whether you see violence as a means that can be used to achieve a good end. If you aren’t, and you don’t, then you are peaceful as defined here. At their best, peaceful people are the ones who encourage dialogue and understanding as a means of solving conflicts. At their worst, they are standing passively by as they or third parties are hurt by less scrupulous individuals.

You received -19 points, making you more Traditional than Experimental. Your position on this scale indicates if you’re more likely to seek out the new and unexpected or if you are more comfortable with the familiar, especially in regards to culture. Note that traditional as defined here does not equal conservative, in the political sense. At their best, traditional people don’t change winning concepts, favouring storytelling over empty poses. At their worst, they are somewhat narrow-minded.

You received 13 points, making you more Cynical than Romantic. Your position on this scale indicates if you are more likely to be wary, suspicious and skeptical to people around you and the world at large, or if you are more likely to believe in grand schemes, happy endings and the basic goodness of humankind. It is by far the most vaguely defined scale, which is why you’ll find the sentence “you are also a lot like x” above. If you feel that your position on this scale is wrong, then you are probably more like author x. At their best, cynical people are able to see through lies and spot crucial flaws in plans and schemes. At their worst, they are overly negative, bringing everybody else down.

Music for the adventure in your mind