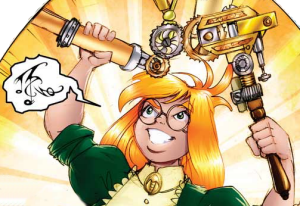 This month’s blog carnival hosted by Mad Brew Labs is about Steampunk & Klokwerks. Steampunk is (as you probably know) one of my favourite genres and so it’s no surprise that I wanted to contribute the blog carnival. But for almost a whole month I couldn’t come up with something to write about. But then something finally “sparked” in me.

When someone asks me what Steampunk is, I usually don’t give lengthy descriptions of all the aspects that make the Steampunk genre, I just show off one of my Girl Genius books. Girl Genius is the definitive steampunk comic series of our times. It has it all: Adventure, Romance, Mad Science. And it’s written and drawn by Phil and Kaja Foglio, the people responsible for my favorite cartoon back from the days, when the Dragon Magazine was still in print: “What’s New with Phil & Dixie?”.

So, what is Girl Genius about? It’s the story about Agatha Heterodyne, heir to the famous Heterodyne family and a powerful Spark. Sparks are that what you would call a “Mad Scientist”. And when she’s building some strange contraption she actually acts pretty mad, but in most cases she is pretty benevolent. Alas not all Sparks are as nice as she is and a couple of years back, an evil Spark called “The Other” has attacked and only the Heterodyne Boys (Agatha’s dad and uncle) and Baron Wulfenbach could save Europe from being conquered by the “Other”. But today, the Heterodyne Boys are missing and Baron Wullfenbach rules the land with an iron fist. But since the series has been created by the Foglios you can expect a lot of weird humor. So, Girl Genius may not be your cup of tea if you like it dead-serious. 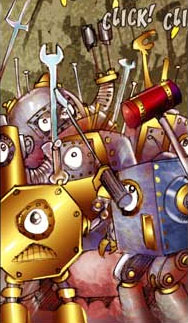 You can actually read all the stories about Agatha for free on the web. At www.girlgeniusonline.com Kaja and Phil Foglio release a new Girl Genius episode every second day or so.

A long time ago, the Foglios and Steve Jackson Games announced a Girl Genius RPG based on the 4th Edition of the GURPS rules, but alas the book isn’t out yet and I fear it could take some more months (or even longer) until we can finally get our hands on an actual copy. But don’t despair. There’s already a very nice GURPS Steampunk book. So, if you are into GURPS, you could pick up a copy of GURPS Steampunk and probably create a homebrew Girl Genius RPG.

Another alternative is Savage Worlds. Savage Worlds is one of the few RPGs that comes with Steampunk support built-in. One of the Arcane Backgrounds is Weird Science, an edge that allows characters to come up with all kinds of nice gizmos.

The power level of a newly created Weird Scientist in Savage Worlds may not be on par with a full-blown Spark in the Girl Genius world, but it’s not something you can’t fix.

While doing some research on Girl Genius I stumbled upon a pretty extensive Girl Genius wiki which includes a lot of background information on the setting. I also found a pretty complete Savage Worlds conversion on Emiricol’s Wikispace. I am pretty convinced you could pull off a GG campaign with “vanilla” Savage Worlds alone, but if you are looking for inspiration, it doesn’t hurt to have a look at this conversion. So, that concludes my contribution to this month’s blog carnival. As always I am interested in your thought? Have you ever thought about running a GG-inspired game? Are you waiting for the GURPS version or are you running a homebrew campaign?