As a follow-up to yesterday’s post I tried to come up with a Savage Worlds version of Agatha Heterodyne, the heroine from Kaja and Phil Foglio’s Girl Genius.

Creating this character was actually harder than I thought. For now I used the Arcane Background (Weird Science) edge for the Spark abilities, although this edge is probably not powerful enough. I also had some trouble coming up with the right powers for her. If any of my readers has some ideas how to improve the character built, I would be very interested to read what he or she came up with.

Agatha Clay (aka Agatha Heterodyne) (as at the beginning of Book 4)
Heterodyne Heir, Novice Spark 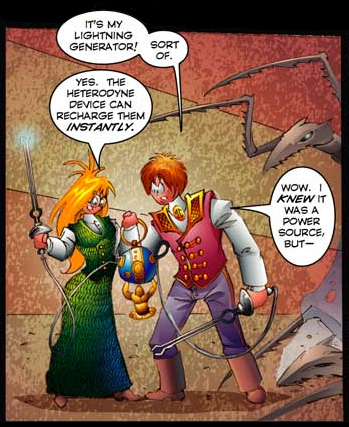 Agatha has built several clanks (including small, self-replicating ones) and worked on a couple of Gilgamesh Wulfenbach’s inventions while she was on the “Castle Wulfenbach” airship, but there were no fitting powers. When running a campaign inspired or based on Girl Genius, the GM definitely needs to add some more powers to emulate especially clanks and some other devices commonly created by Sparks.

Review: Lovecraftian Tales from the Table