“It was another cold and rainy night. I was sitting in my 20 square yards appartment and bureau, staring into a half-empty glass of bourbon whiskey. A knock on the door brought me back to reality and ended the daydreaming. Who might that be? A gorgeous blonde who wants to hire me to spy on her cheating husband or the landlord trying to get last month’s rent…” 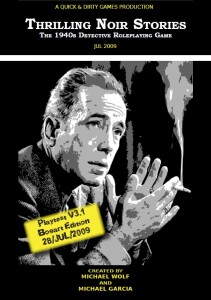 Thrilling Noir Stories is our attempt to create a rules-light roleplaying game inspired by the “film noir” genre. Some time ago it started as a project by Michael Garcia and me. When we released the first playtest version several people started to send in their ideas and comments which quickly lead to an updated release. Then someone noticed that there is already a roleplaying-game called NOIR, so we changed the name. And since the copyright status of the artwork we used was unclear, I changed the cover art. And if you ask me, the new cover fits even better! 🙂

We also decided to release the whole game under the Creative Commons Attribution Non-Commercial Share-Alike 3.0 license, to make it easier for everyone to share and adapt the game freely.

If you want to have a look at the latest version, you can download the “Bogart Edition” PDF here. And please post your notes at the playtest forums!