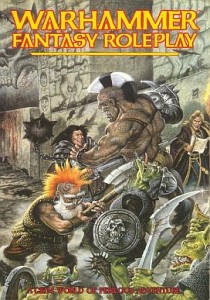 I have to admit that in my last post about that topic I was really ranting and raving. The original WHFRP was probably the game that influenced me the most in my gaming career and it will always be one of my favorite game. So I was pretty much shocked when I saw that FFG is about to throw out the classic system in favor of a new system that features fancy custom dice, action and ability cards.

I am obviously not the only one who is more than skeptical about the upcoming game by FFG. Several bloggers commented on the announcement of this new edition of WHFRP including UncleBear and Gnognardia among others.

And it seems the announcement has even more ramifications. As the German blog “Rollenspiel-Almanach” reported, there will probably be no continuation of the German WHFRP 2nd Edition line. The German version of WHFRP was produced by Feder & Schwert who now confirmed that their license has not been extended, so that there will be no German translation of “Shades of Empire” and the “Career Compendium”.

These are bad times for fans of 1st and 2nd Edition Warhammer Fantasy Roleplay. What do you guys think? Will they pull a WotC on us and remove all PDF products of older editions from the stores, too? Or will we at least complete our collection of 2nd edition books before the new game is out?