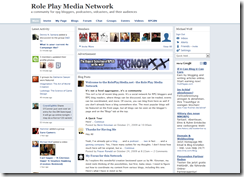 Just a few hours ago I was surprised to find out that Berin Kinsman has withdrawn his offer to take over the RPGBN but created a social network for gamers instead. And I have to admit that was a great idea.

The “Role Play Media Network” is probably the best way to keep the community that developed around the RPG Bloggers Network alive and thriving even when the network itself sails into an uncertain future.

From what I’ve seen so far, the network is already thriving and I am sure it will have a great future!
Congratulations, Berin!

Dungeonslayers: Tomb of the Witchking