In August I wrote a post about the upcoming games I was excited about. Some of the games that I listed back then have been released in the meantime, so I thought and update is in order. 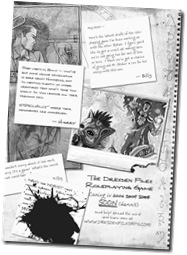 The Dresden Files RPG made it from a third place to the top during the last months. I’ve started reading the first novel of Jim Butcher’s series a couple of days ago and I have to admit that “Storm Front” is one of the best books I’ve read in quite some time. I have also seen a few episodes of the TV series that initially sparked my interest for the Dresden Files RPG. Another factor is the use of the FATE rules. FATE is a really exciting system that I would love to try out sometimes, and the “Dresdenverse” sounds like a good match.

Halloween is Harry Dresden’s birthday and it’s the date when we hopefully will get a few more updates on the progress of the game and what’s coming up in 2010. I still hope we get a release date soon. I want this game … yesterday! 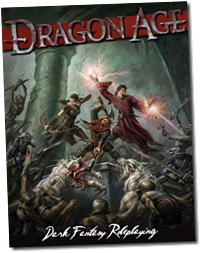 Recently Dragon Age: Origins, Bioware’s latest roleplaying game for the PC and video game consoles, went gold and the release is imminent. But alas the information available about the upcoming pen & paper game by Green Ronin based on the franchise is spotty at best.

This is really a shame since this could be pretty cool. Dragon Age will probably sell like hotcakes and a Dragon Age pen & paper game may a perfect way to bring new people to the hobby. That’s probably why Green Ronin decided to go with the boxed set format for the first release. This box will include a 64-paged Player’s Guide, a 64-page Gamemaster’s Guide, a poster map of the nation of Ferelden and 3 six-sided dice.

But aside from that lack of information I am quite excited. The Dragon Age setting looks a bit more grim and gritty than your standard fantasy fare and I am really interested how the game system looks like that Green Ronin designed for the tabletop version of Dragon Age.

According to a forum post by Chris Pramas, Green Ronin hopes to get the game released before Christmas. Yay!

So, what upcoming games are you excited about? Please share your thoughts in the comments below!