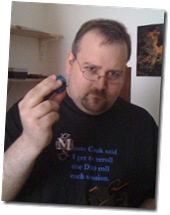 Why is that the case? First the RPG hobby is not widely known. Most people who hear the word roleplay think about French maids and cop uniforms or believe you’re talking about your last session at the psychotherapist’s.

And a few people who know what you are talking about, think you must be an evil Satanist. Thanks to Patricia Pulling and her group BADD (Bothered About Dungeons and Dragons) a lot of people still believe today that roleplaying game enthusiasts are evil devil worshippers. *sigh*

So, a lot of people keep their hobby a secret because they fear these misconceptions may get them in trouble with friends, family and coworkers. I have to admit it’s not as bad in Germany. From what I know the Anti-D&D craze hasn’t been as bad in Europe, and I can openly talk about my hobby without someone freaking out about it. I even wear my geek  t-shirts at work. Of course I have to explain what these games are about quite often. But I have never got any negative reactions as far I can remember.

Do you keep your hobby a secret? Or can you talk about RPGs with your friends, family and perhaps even coworkers openly?