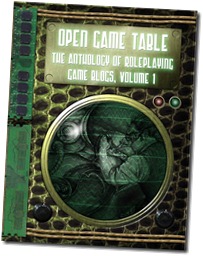 Jonathan Jacobs has reduced the price of the PDF version of the Open Game Table: The Anthology of Roleplaying Game Blogs, Vol. 1 to just $4.99 until the end of the month! If you don’t own a copy, yet, this is your chance!

And if you don’t know what the OGT is about check out the product information from Amazon.com:

Open Game Table is aimed at bridging the gap between the RPG blogging community and the broader table-top gaming fan base by showcasing the best talent the community has to offer. Within these pages are 47 blog posts from 32 top-quality RPG blogs, plus a Foreword written by RPG luminary Wolfgang Baur.

Packed with juicy content and over 60 illustrations, this book is Pure Gold. The book chapters include:

This anthology is the result of the hard work of nearly 100 volunteers, authors, editors, judges, artists, and designers. A true grass roots effort; it is a tour de force of the RPG blogging universe.

This book contains the articles of many members of the RPG Bloggers Network including my very own post about Firearms in D&D 4th Edition. If you are still unsure, if you want to buy it, check out what WIRED Magazine wrote about the OGT:

The Open Game Table Anthology is a treasure trove. A tome worth slaying a few orcs for. Because it had such a diverse range of material to choose from it has been able to collate not just quality writing and ideas, but a real breadth of discussion that you don’t get as often as you would like in role playing materials. There are chapters for GMs and DMs on Play Stlyle, Monsters and NPCs and Campaign Setting Design. There are articles for players such as "Advice On Being A Good Player". My favorite chapter was Chapter 9 which details some great historical moments and commentary on how RPGs have become what they are today. Open Game Table has two clear strengths: content and content. The quality of the content and the breadth of the content make this anthology worth the money. The amount of ideas for GMs on how to handle player conflict, managing scenes, improving your role playing are well chosen and topical. In many ways, this book is like a continuous improvement handbook for RPG groups across the globe. It has ideas and tips throughout each article that can help you create better games and engage better as an RPG Group and ultimately have more fun – which is what it is all about, really. Braunstein I personally would buy the whole book for just the section on RPG History. The article that describes a young Dave Arneson taking all before him in "Braunstein" – the world’s first ever role playing game – is delightful. The passion with which the author, Ben Robbins encourages us all to talk to those who were at the beginning of it all, and to capture and learn from that history is what an anthology like this is all about…

Check out the full review here.

To get your discount, please use this link: http://is.gd/548Ox

One thought on “Get the Open Game Table for $4.99 until November 30th”