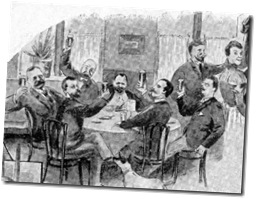 Some time ago I was asked by an old friend if I would like to participate in a regulars’ table focused on the RPG hobby. He already had decided on a location and was looking for people who might be interested in helping to organize the whole thing. I was hesitant at first but after a while the idea grew on my and I agreed to help him.

The basic idea is that we meet every month or so in the basement vault of the Villa Konthor (see the link above for some photos) where we then talk about roleplaying games, RPG news, the gaming scene and related topics. We also plan to have two set topics for each meeting. On our first meeting on March 16th I will introduce the new Dragon Age boxed set and Dungeonslayers to the attending gamers. In later meetings we want to talk about RPG blogs, Microlite gaming, and other subjects of interest.

Most of the attendees for the first meeting will probably be close friends of the guy who approached me, but basically everyone interested in RPGs may attend. What really surprised me, that certain topics we discuss on the RPG Bloggers Network for example on an almost daily basis are totally unknown to most “regular” gamers. Even my old friend, who recently joined a major German RPG publisher as freelancer didn’t know most of the games I am writing about in this blog. I have to admit I didn’t really expect that.

In a way that realization strengthened my decision to help him organize this regulars’ table and spread the word about games I love and the hot topics of the RPG blogosphere outside of the internet in the real world.

If you are interested to learn more about the planned regulars’ table, check out the site we created for that project. But please note that the site is entirely in the German language. You’ve been warned! 😉

P.S.: I am not sure if the English “regular’s table” is really the correct translation for the German Stammtisch, but it’s the closest I could find. A related term is possibly the Spanish tertulia.

Dragon Warriors is back