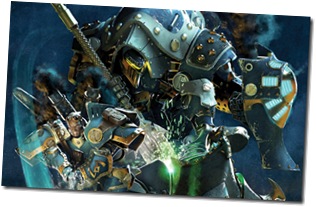 I almost overlooked yesterday’s post at Purple Pawn. But then I scrolled back and read the headline again: “It’s Alive: The Iron Kingdoms RPG Lives!"

I have to admit I had to rub my eyes and reread everything, because I thought I was dreaming. But as is turns out, Privateer Press will be releasing a new Iron Kingdoms RPG. While we shouldn’t expect it before 2011, it could pretty much be what a lot of gamers have been waiting for. And luckily the decided to drop the d20 System and use a proprietary system, probably one based on the Warmachine Mk2 miniature game. Matt Wilson revealed Privateer Press’ plans during yesterday’s interview which can be read over at Obsidian Portal. Part two of the interview should be out later today.

That’s great news. I love the Iron Kingdoms setting but I never felt that d20 was a good match for the setting. I had some ideas for converting the Iron Kingdoms campaign to Savage Worlds, but a proprietary game based on the Warmachine battle system, will save me a lot of work. And I can finally put my Warmachine miniatures to good use that way. 🙂