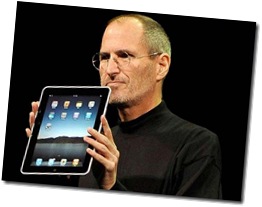 I have to admit I am very excited about Apple’s upcoming iPad. In my opinion it closes the gap between smartphones and notebooks, could be a perfect alternative to ebook readers like the Kindle, and be the perfect tool for technophile GMs.
Even at day one the iPad is more than able to handle the basic needs of the GM:

Dice rolling
If you don’t have any physical dice with you, you can use one of the great dice rolling applications that are even now available on the AppStore. They will all run on the iPad, too, like the other handy tools like initiative trackers.

Rules
The iPhone’s PDF viewer is usually able to view even PDFs with a lot of artwork in it, although it’s a bit slow at times. But the iPad has two advantages: bigger screen and faster CPU. I am sure it will be pretty easy to view your RPG PDFs on the iPad. Some publishers already give you a free copy of the rulebook in PDF format when you buy the dead tree version, so when using an iPad you might even leave your physical books at home.
If the rules come in HTML it’s no problem either as long as you have WiFi access. And that’s already the case in a lot of private homes. Looking up the Pathfinder SRD on your iPad is just a few taps away!

Music
I use a lot of music when running games. Usually I either connect my iPod or iPhone to a Logitech dock or I use my netbook to access my iTunes library over WiFi. The same should be possible using the iPad.

Preparing games
A lot of people use their computers to write down notes for their upcoming games. With an iPhone and with the upcoming iPad you can do this on the commute, too (when you don’t commute by car of course). I am actually writing this post on my iPhone right now. And the iPad will come with a full version of iWork, which will make this task even easier.

The future
What I would like to see are more RPG tools for the iPhone and iPad. I would gladly pay for an app that allows me to look up rules, includes an dice roller and perhaps a character generator. An app similar to Fantasy Grounds Ii could be interesting, too. Remember the D&D on the Microsoft Surface videos that circulated on the RPG blogosphere recently? You can a lot of what you’ve seen in this video on an iPad for a much lower price (if someone writes an app for it).

In my opinion technology should be used to make our lives easier and to enhance things that already work without it. Pen & paper games are fine as they are now, but I don’t mind enhancing the experience by “throwing technology at it” as my friend Andrew usually calls it.