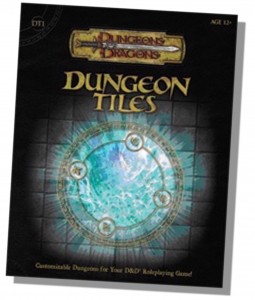 Continuing my reviews of the map aides I use for my games. On my previous post I talked about Flip Mats. Another great tool is Wizards of the Coast’s Dungeon Tiles. What can be said about them, that others have not said before?

Wizards had the great idea of printing map tiles for different settings, ruins, dungeons, caverns, woods, and even giant sized locations! They come in a nice thick precut cardstock that feels almost like game board material, and you can arrange them in different configurations, giving you myriad possibilities for combining them. Each set brings some suggestions on how to arrange the pieces, but play with these babies and I assure you will be making all sorts of cool interesting dungeons.

There was even a set for the Star Wars RPG that was so useful I got two copies. Ok I’ll admit it; I’ve gotten more than one of many of them…

They are cheap for what they offer, the suggested retail price for the latest sets is $11.95 and for all you can do with them I think they are a steal. I’ve even written on them with dry erase markers and the writing has come off easily. I’ve avoided certain colors that have been difficult to remove form other surfaces, like green and have NOT left the marker on the surface overnight, I always clean them right after using them, so be forewarned, don’t blame me for damaging your precious Dungeon Tiles!

My biggest problem using them is the sheer number of options all these many tiles and pieces offer me. It can be overwhelming! I plan my encounters ahead of time, but the flow of the game sometimes dictates a change of pace or location, and when that happens, putting tiles together in a new configuration can be complicated. 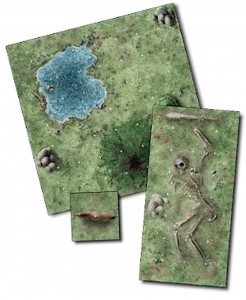 They are great for dungeon crawls and for sessions where you can plan the locations well in advanced and can put the tiles together before hand. When I’ve used them I normally build the set pieces with the different tiles and then put them in zip lock bags labeled according to the encounter name or number. I think using an appropriately colored mat to place the different pieces gives a nice sense of place and combined with the blank side of Flip Mats (see the previous post for details on Flip Mats) you can build even more varied and diverse encounters.

For more spontaneous games where encounter can happen unexpectedly they are a little less useful. I know that as a GM you can create the illusion of spontaneity with careful planning but as a storyteller I like to give myself some leeway and room to improvise and integrate the feedback of the players and how they interact with the story.

Storing the tiles and sorting them out for game prep has been a chore and I think that may be the main reason I don’t use them more often. There are some great suggestions out there on the Internet on how to store them; I currently do it like Mike Shea suggests on Sly Flourish and Newbie DM shows in his video (watch it, its funny!).This post in the EN World Forums also has a GREAT idea for storing the tiles.

Newbie DM also has great posts, including video, on how to use your Dungeon Tiles in 3D (no special glasses needed), as well as putting together the 3D pieces from Harrowing Halls, HIGLY recommended!

Well that’s about it for Dungeon Tiles, they are a great resource that allow you to mix and match pieces to create your own battle scenes. Next post, Map Packs!

Escape The Noose, A Zweihänder Adventure