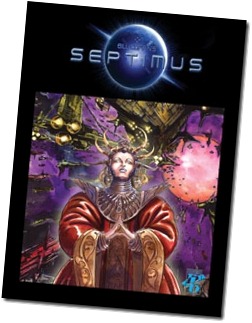 The only game ever released by WEG under the Open D6 brand was Bill Coffin’s Septimus. Now that Bill got the full rights to this game back  by Eric Gibson, WEG’s owner, he has decided to release it for free over RPGNow/Drivethru RPG. So what’s Septimus about? Here’s the blurb from the RPGNow product page:

Bill Coffin’s Septimus sets the players inside a Dyson Sphere made from an unknown and unknowable alien technology. Faction pitted against faction to control the sphere and the amazing technology therein — a technology so great that no weakness cannot be eliminated and even death is not final. But, even as the obsessed techno-cult, the Sindivar Extant seeks to build a Utopia around Septimus’ many nanofoundries, a dark secret spreads. The same technology that is a boon to so many billions of people contains a flaw, a flaw that may have spelled doom to the great originators, a flaw that threatens to crush Septimus and its inhabitants, even before the greatest of secrets yet remains undiscovered

Whether you fight alongside the Extant and the Cadre, or whether you join one of the many factions seeking to wrestle power and wealth from the Cult, you are sure to find a game that is right for you. This 360+ page RPG comes packed with everything you need for many hundreds of hours of gaming. This books needs no additional material to play. It comes with the OpenD6 core rules, huge amounts of setting information, complete with area maps, plus the most exhaustive character generation and character option information ever in a single D6 System book.

Inspired by, and meant to capture all the fun of the Classic Star Wars roleplaying game by West End Games, this free-wheeling Space Opera also takes you science fiction fun to the next level. More mature and multi-tiered that Star Wars D6, Septimus includes elements of Cyberpunk, Transhumanism, Light Mecha, all the way to fantasy elements. Septimus’ vast territory only about 1 or 2% of which has been mapped, means an almost unlimited field to play in.

If you like the d6 System and space opera, you should definitely have a look at Septimus! You can download the complete game as a 364-paged PDF here.